Woo, I’m signed in again.  What a pain in the arse that has become since they monkeyed with the front page.  Anyway, in the name of just getting a post in, I present another piece of my personal collection.  Not only that, but today is special.  This is one of my most very favorite pieces of my personal collection.  It comes from my first trade with Marie from A Cardboard Problem and in recent times the Upper Deck Blog.  Anyway, I never actually got around to posting the trade I don’t think, but I did scan it all.  And now I present one of the coolest cards I’ve ever laid eyes on, the main event of what Marie sent those many moons ago: 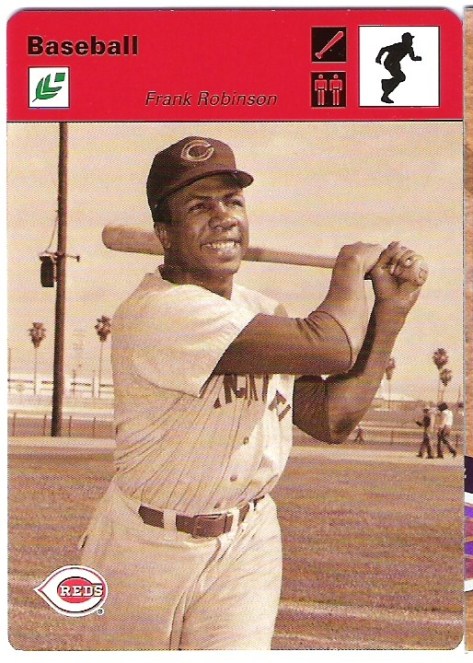 How cool is that?  It’s a 2004 Leaf Sportscaster card #ed to either /20 or /40 (don’t feel like messing with teh ginormo binder to find out for sure, will edit it to the right number when I do get around to messing with it).  The reason this is so cool, is that back when Beckett was still to some degree relevant to me, these cards caught my eye for some reason.  Maybe it was the name, or the rarity, but for some reason, their entry in the price guide I was always curious about.  I would always stop on it when I’d, um, leaf through the thing.

I never thought I’d actually own one though.  I had never consistently collected baseball, it didn’t become my #1 until I discovered the card blogs at the beginning of 2008 (yep, I’m not quite an original, but I’ve been around since pretty early on, first starting my blog around March of last year, only got six posts in before giving up until several months later when I deleted the old posts and started from scratch), and I’m not sure I even had access to whatever Donruss brand they came in anyway, and definitely not if they were hobby exclusive.  There hasn’t been a card shop around here since around the turn of the milliniem.  And they were pretty rare, to me at least.  I still don’t know exactly how hard to come by they were, but I figured it was beyond my realm of luck.  I never pulled anything #ed that low until 2005.

Anyway, yes, this is one of the most awesome cards I own, not just because of it’s inherent awesomeness, that it’s pretty rare and features one of the greatest of all time, but because there is a debatably interesting story behind it.  There is a reason, that I can’t adequately explain, for me to have been drawn to it, to have wanted it, even though I didn’t quite understand what it was, and it came to me as a total surprise.

All I wonder about now, is what magic Marie has up her sleeve for round two, if we ever get around to finishing this second trade…

Oh, and Sooz, I need your address.  I’m still waiting to find out what exactly I need to send to Marie, but all your cards have been ready to go for awhile.

Then again, I guess there’s no hurry.  I’m pretty much broke till December, so I can’t send it till then anyway.  Meh, just send ya addy whenever.  I’m going to sleep.  This post took way longer than intended (they always do…).  Peace, love, and fighting spirit!

One thought on “The Lonestarr Personal Collection #8”