The come from Baseball Dad and Da Rook, respectively.  I will find the cards I’m looking for and send them to them in return for these beauties sooner or later. 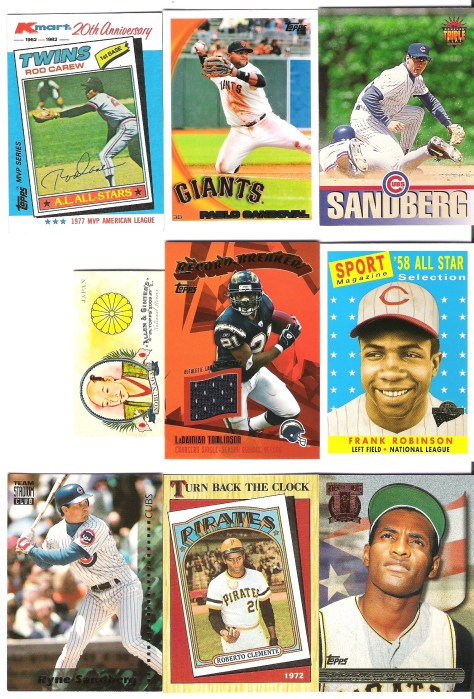 A couple Rynos, Rod Carew for K-Mart, Frank Robinson, the First Clementes I've ever gotten in a trade, the rare set need card (Nobunaga), and LT aka the reason for the trade in the first place.

And, though I still can’t find the missing Alomar, this trade is finally mailer’d up and ready to go.  I did call his bluff and throw in an extra case & a half of random Indians cards though.

Now for the cards from Sarah:

Ichiro & Vlad toppstown golds, old school Ted, probably the coolest Tales of the Game insert, and possibly the only meaningful ticket in Ticket to Stardom..

Man, remember when everyone thought the Cubs horribly overpaid for Lilly?  He’s only gone on to become the most reliable pitcher in one of the better starting rotations in the league.  He’s like… the anchor that keeps them afloat.

And I mentioned the Shin-Soo Choo card might be the only one with a ticket to a meaningful game to the player depicted in the entire set.  Behold! 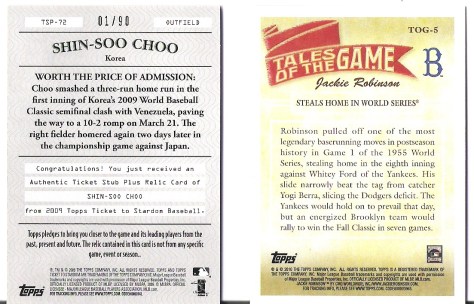 The only way it could've been better if the ticket was from the semifinal, but it's Ticket to Stardom, so I'll take what I can get. Also, it's #'ed 1/90, which is nice. Also, Jackie's legendarytastic World Series moment in text form. Reading is good.

Don’t see too many tickets from this where the player actually did something, so I was pleasantly surprised to get a memorable one.  Hopefully I can find the straggler and get the gaggle of Chippahs sent on their way soon.

Oh, my wantlist has been updated quite a bit.  Be sure to check it out!