I’ll be back to semi-regular blogging soon I think.  Got the card table and the cards are slowly getting organized and will begin being sent out in early August.  If those I owe cards or were in the process of working out a trade with would comment or email what I was supposed to be sending them, that would be helpful.  Thanks.

In the meantime, please enjoy these ’08 topps Chrome inserts, pulled from way too many packs from the $1.59 bin at Target awhile back.  All are available, as (well as the base cards) except for the Trading Card History cards. I’m thinking those may be a worthy set to build.  And the Mannyfractor is already set aside for Shoebox Legends if he wants it.

Now then, onto the cards!

Apologies for the lack of captions on a couple pics.  I’m not redoing them.  So just thank WordPress for eating ’em & proceed.  Besides, you can click on the pics to make them ginormous & readable anyway.  Grrr…

Anyway, as mentioned, all but the Mannyfractor are keepers on the last pic.  Kinda just want to get them all one version.

Vampirella! I don't know how she ended up here when I uploaded her third, but w/e, WordPress.

Here's Ryu. As mediocre as advertised.

Last two are a webcomic idea that may or may not see the light of day.  Who wants some serious war story with chibis?

I’m back, but still not quite all the way.  Well, I might never be all the way back as a collector of sports cards, but that is neither here nor there.  I’ll be returning to irregularly regular blogging sometime in August I think.  Just trying to get all my trading affairs in order and sent, and they won’t be sent till then, cuz I am broker than broke.  I won’t go hungry, but I’ve got literally $20 for the rest of the month, chiefly because I had to finally get a new recliner.  Mine completely fell apart at the very beginning of the month, so I spent the entire 4th of July weekend marooned at the parents, and hit every place that sells used furniture in town during that time, finally finding a great new arrival on the 5th.  Seriously, it’s like a freaking throne that reclines, well worth the just north of $100 I spent on it.  That is as cheap as they got, except for a couple tiny old ones that were $30 or $40 at another place, but they weren’t even close to this one, so I had to go with it.

Anyway, no sooner am I back in my own place than I realize something is seriously amiss with my internet.  As in it was barely working when it was working, and most of the time it wasn’t working at all.  By process of elimination, it quickly became clear that the modem was/is the problem.  After doing a little research last Sunday or whenever it was, I found a couple of potential fixes to try before taking it in.

And one of them worked to a certain degree.  It improved steadily during the week and is now working fairly regularly, though usually still pretty slow.  So it will still need to be taken in to be checked out, but I have it going now, so I thought I’d let y’all know I’m still around.

Though if you follow me on twitter, you know even balky internet hasn’t done much to shut me up. 😛

I’ve made somewhat decent use of the internetless & moneyless time though.  Fleshed out more backstory for the novel, did more card organizing (even got a few packages together so far), and I

‘ve done a lot of drawing of late.  Which brings us to this post.  I have new sketch cards to share!

Starting it off as sexy as my mediocre skillz can muster with the original Latina comic book heroine, Senorita Rio!

Hmm… looks like I’ve a little more shading to do.  But never mind that now.  Moving on!

A fairly awful old rendition of Street Fighter's own Ryu that I finally got around to coloring not long ago...

Ken, the main of douches everywhere. Basically just replace Ryu's name with Ken's in the above caption. Done at the same time as Ryu. 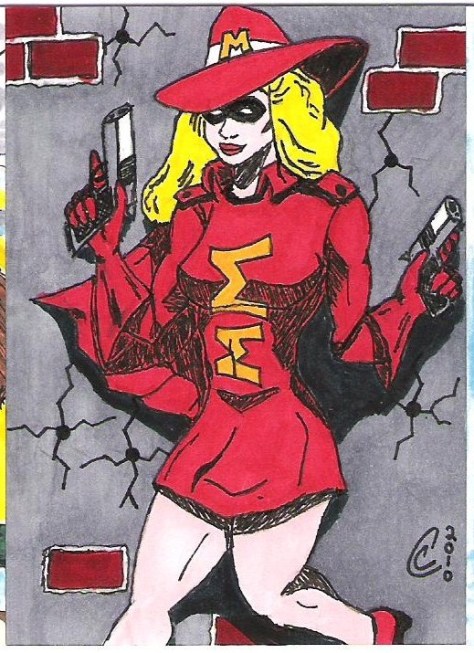 This is my commission for Shot Not Taken. You may have seen it twitpic'd already if you follow me on twitter.

I received Stan Winston & Gina Torres Ink Vault autos for this. So if you’d like a commission, and if your looking to trade cards for a sketch rather than pay ca$h money, there’s an idea of the kind of hittage it may take.  A lil cash & a lil hittage may be acceptable too.

We’re going baseball for the last one for today.

Another Nick Markakis sketch card. This is a little more like what I wanted to do with the first one.

I think this is one is supposed to go to Beardy if he ever decides to claim it.  It’s been done for awhile now.  I think I did this card back while I was working on the Breygent sketch cards, so three months or more.  Think I mentioned it was done in a comment over at his place, but just recently remembered to scan it.

That’s all for now.  I’ve been working on this post off & on for a good six hours, maybe longer, due to previously mentioned internet balkiness, and general distraction.  So, um, seeya when I see ya. 😉