Voice of the Collector hit the recent Chicagoland Entertainment Collectors Expo.  He tweeted me he had picked up something to send me, so I sent my address, and a few days later there was a big bubble mailer among my little eBay ones.  It took awhile for it to register with me where it came from though because the shipping was handled online and thus looked much like the rest of the eBay mailers.  So after looking through everything in the package (twice) in astonishment and bewilderment, thinking someone I purchased something from on eBay mistakenly sent these, I finally noticed the name and address it came from.  Then it FINALLY clicked with me that this is what Rob sent.  Good ol’ David ain’t got a thing on my slow-wittedness… *sigh*

With the super secret origin out of the way, let’s see all the freakin’ awesome stuff he sent!  Not much I can add, mostly gonna let the coolness speak for itself.  So just sit back, relax, and enjoy the pretty. 😀 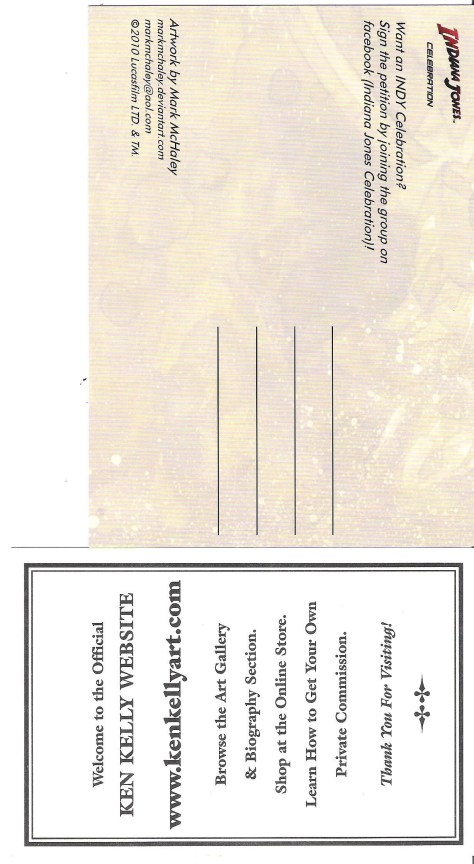 Then some artist promos (and business cards!).. 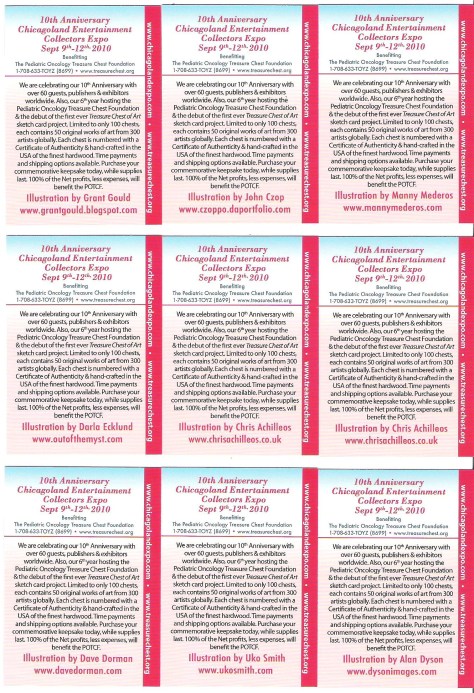 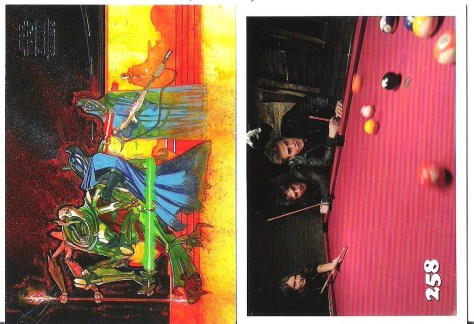 And yes, these are probably about as close as I will ever get to owning a Katie Cook sketch card without pulling one:

Thanks for these great cards, Rob!  Please let me know if I can send anything in return.

Or Power Man and Iron Fist as they are better known.  Well, actually Luke Cage is probably better known as ‘Luke Cage’ these days.  Finished off the cards awhile back but couldn’t get ’em scanned straight enough.  So I tried again and this is as good as it’s gonna get.  Enjoy.

Welcome to the '80s, and have a pleasant stay. 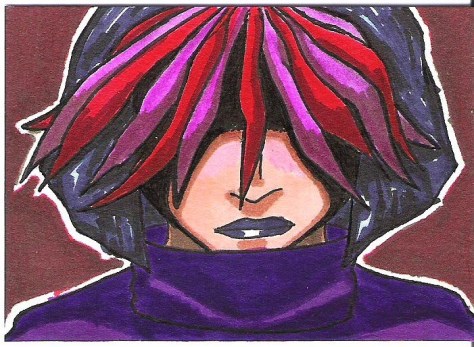 I don't have a name for this sullen cutie. I just started drawing with no real plan, and she is what came out. I really like this one though. Don't ya just wanna give her a big hug?

Here is the other package I received (last) Monday.  These are from Too Many Grandersons hisself.  Behold!

Suh-weet Walter Payton reprints, Gold Hester, base blue Manning parallel /500, Urlacher (foil and thus poorly scanned) insert from rookie year, and more Urlachers (have at that code)! How much better does that blue parallel look than the boring black borders that they've trotted out most of the last 10 or so years?? A set that looks that good I might actually consider collecting, as I once did the the '02 Gridiron Kings (even picked up about half the Legend SPs in a lot once upon a midnight's dreary).

More Bears! Greg Olsen, Bernard Barrien black parallel from one of the single greatest set designs in the history of cards, Cutler, some rookies, and my personal favorite, my first and Julius Peppers as a Bear.

Last of the Bears... The more I think about, the more I think Rex' dad was right about the Bears mismanagement of QBs, especially in the Super Bowl. Fortunately, in getting Martz, they seemed to have wised up to some degree. Not sure I like the total abandonment of the running game though. Somehow Bronko was the only card I already had amongst the Bears.

Moving on to baseball now…

Vladdy! I may have the Own the Game & one of ToppsTownies, but the rest are new to me, three I've never even seen before. The Diamond King is the gold parallel version #'ed to /2500.

Ichiro! Don't get a lot of him in trades. The '04 Own the Game in the middle just insane. And a rookie of the BEST catcher in baseball. Well, he's in that elite group with Mauer, McCann, and Victor Martinez (and maybe Posey in a year or two) at the very top anyway.

And a few of my favorite Cubs to finish it off. I really hope Big Z sticks around if it's between keeping him or Dempster. In fact, I think I'd just rather Dempster leave regardless. Something bothers me about him.

Thanks for the great cards!  I’ll get together something worthwhile to send in return… eventually. *sigh*

Two trade packages arrived (last) Monday.  They were good too, scratching a few wantlist items that rarely get itched.  Or something.  Um, anyway, here is the first, from the BA Benny hisself.  And believe it or not, I actually sent my end of this one out first, and in a timely manner.  What?  I’m not lying!  It’s true, I swear!  Oh, hey, is that Bigfoot making out with the Loch Ness Monster? 😛 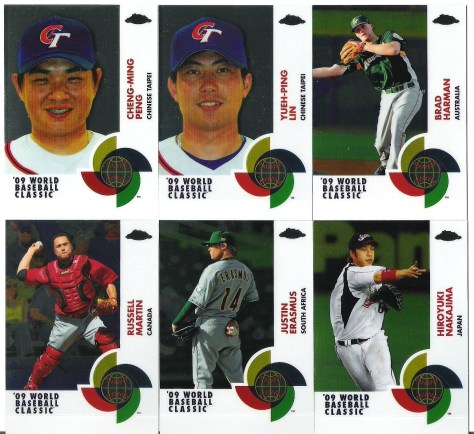 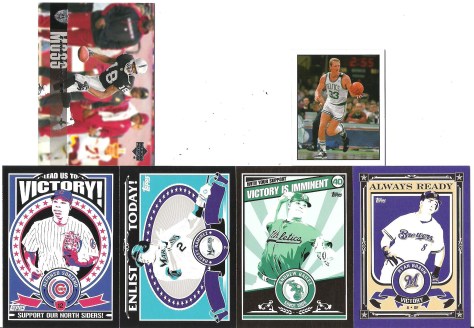 2009 U&H Propaganda Posters, Randy Moss that didn't fit on the player/team scan, and the Bird Hit Parade of Champions that started the whole thing..

So I happened across The Real DFG‘s blog earlier tonight.  It’s a nice blog, I hope to trade with him sometime.  My cards of Pittsburgh teams need a good home.  Anyway, he happened across a random card-related blog post far beyond the reaches of our known card blogging universe.  It read pretty negative and bitter, regardless of the intended tone.  It bothered me, so I signed up there just to leave a comment.  It turned out to be pretty long, long enough to be it’s own blog post.  So here is my response, in it’s entirety.  What do you think?  Am I on point or no?:

Wow, way to miss the point there, dude.  However one collects, it’s supposed to be about HAVING FUN.  Period.  You sound bitter over sinking so much money into this HOBBY and not getting a return on it.  That’s fine and I won’t begrudge you for being upset with that mindset, but there’s no reason to crap all over us that do enjoy collecting cards, and it still remains a respectable number.  There are many active forums and hundreds of blogs dedicated to collecting, so calling what we do “dead” is woefully inaccurate.  It may not be what it once was, but I’d argue the boom is the anomaly, and where we’re at now is pretty similar to where we were before things blew up, just with adults making up a considerably larger percentage of the market.

The thing is, most of us aren’t deluded enough to think we will actually make any money on it at this point, and when we can make a bit of cash back on a big pull, it’s just a little bonus.  We collect what we collect because, first and foremost, WE ENJOY IT.  And those that are in it for the money have to be hella dedicated and lucky to actually be profitable, so I imagine they must derive some degree of enjoyment from it as well.  After all, there are much easier ways to squeak by than buying and selling baseball cards, even (or perhaps especially) in this crap economy.

So things don’t look good at all compared to where they were at it’s peak, but duh, things never look good compared to the absolute highest of highs.  So don’t look down on us, don’t mock us or pity us.  We don’t care that business isn’t booming right now, mocking is just rude in any situation, and we don’t need pitied for our choice of hobby.  We know who we are, we know what we have gotten into, we understand it and we are fine with it.  We collect because we enjoy it.  You don’t seem to understand that the only destination, whether it’s collecting cards or any other hobby, is the amount of enjoyment you get out of it.  That is the entire point of a hobby.  However you go about it, it’s supposed to be about doing something you enjoy.  And if you can’t find the fun in it, then maybe it’s not the right hobby for you.

It’s a shame you weren’t able to enjoy this hobby, that somehow it rolled you bad enough to feel this bitter over it all these years later.  Like virtually everything in life, it can be a frustrating hobby at times, no collector would deny that.  But there is enough good in it for us to keep at it, and as long as that is the case, who are you or anyone else to judge?

So it turns out I did do the pimpin’ of  promising young blog Too Many Grandersons *thumbs up* in a timely-enough fashion to get a Gridiron Giveaway code.  And so I took the giveaway code and waited a pleasingly short time until the list looked fairly promising for something vintage.  I have very little pre-1980 baseball, and even less football (about 4 or 5 cards total I think), so I wanted to kick it old school.  And kick it old school I did:

Man those are some sad team leading statistics, but whatev, it’s vintage, and Chuck Muncie was actually pretty good back in the day (and his glasses are badass), so I’m happy.  And you can’t really hope for any better than that in either of topps’ Million Card Giveaways.  Otherwise you will likely be sorely disappointed.

Anyway, thanks much for the code!  And I hope everyone else gets something they like with theirs too.

And he’s offering cards for promotion! Why did no one ever think of this before?! It’s brilliant!  And I’m liking the blog so far, so I’ve got no qualms about taking this particular bribe.  I only hope I got this done soon enough to get a piece of the action.

So mosey on over to Too Many Grandersons when you are done here.  There are box breaks and reviews.