First, let me start by saying I’d like to post more often.  It’s not like I don’t have endless amounts of free time to post, because quite frankly, I do.  As you may know, I am Bipolar to a pretty serious degree.  As such, actual pressing responsibilities are pretty few & far between.  I don’t have a lot I have to do, though I have slowly been taking over more and more of my life the last 18 months or so.  The problem is, I just don’t have any useful discourse very often.  I don’t trade a ton because I’m so slow about it (again, no real excuse for the slowness, my baseball cards aren’t even horribly disorganized anymore) and my ability to scan stuff is limited to how often I go over to my parents’ place and actually leave myself enough time to scan between other stuff, since I’ve never gotten around to getting myself a scanner (not that I have room for one right now anyway).  And I’m not focused enough to stay fully up on the latest news, so I can’t really comment on the state of the Hobby that much, or whatever other pretty shiny piques my interest any given hour.  My funds are so limited that there’s no point in keeping that close of a watch on things anyway, since I’m not gonna be able to experience a lot of what the hobby has to offer, in pack/box form at least.

That all said, I do have a growing backlog of trade packages scanned and ready for posting.  So I’ll start with World Baseball Classic half of the still somewhat recent trade with Thoughts and Sox.  There were some great football cards too, but we’ll get to those another time.  Otherwise it’ll be daybreak before I finish this post, and I’m trying hard to not do that so much anymore.  So enough jibba-jabba, let’s get into it.

These are from 2006 Upper Deck Future Stars. Two or three cards shy of the 25 card base set, and I think one dupe.

These cards are super shiny and like Spuctrum, and are almost exactly as thin. They look ten times better though, with the solid colored world map in the background to even things out. The flags class things up a bit too.

The purples are numbered /1799 and are presumably the easiest parallel pull. Apparently there are three more levels of parallel as well, according to Upper Deck's checklist. 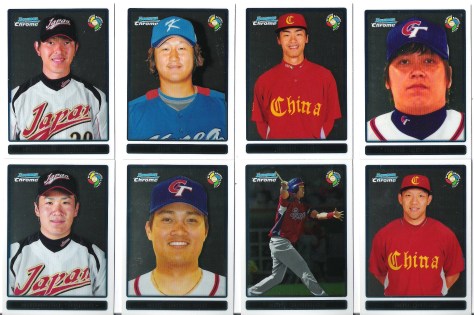 Not to be outdone, here is topps' chromed out 2009 Bowman version of World Baseball Classic subset/insert overkill. I love it though. The WBC is a fun event.

Last scan and then we're in the clear. Lots of shiny good stuff. Thanks again to Thoughts and Sox, and remember, if you want to dump your unwanted World Baseball Classic stuff, you can send it riiiight here.

One thought on “A Post? For Realz? ~~ Thoughts and Sox WBC”