As promised, a blaster of Panini Americana.  I have a second one too, but scanning has become an arduous process, who knows when I’ll get to it.  Anyway, enjoy this post with minimal jibba-jabba interruption. 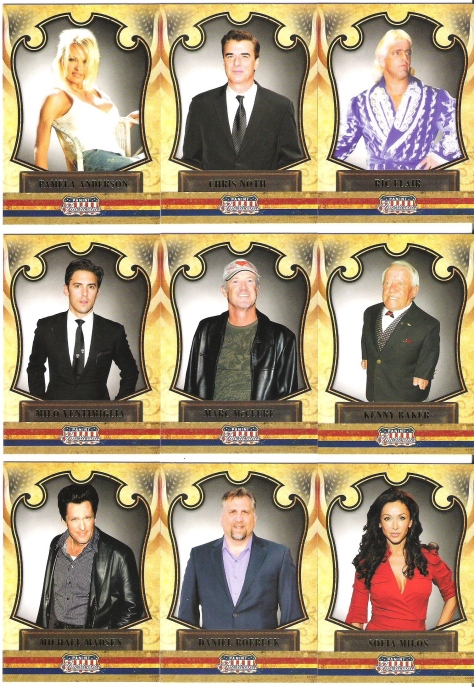 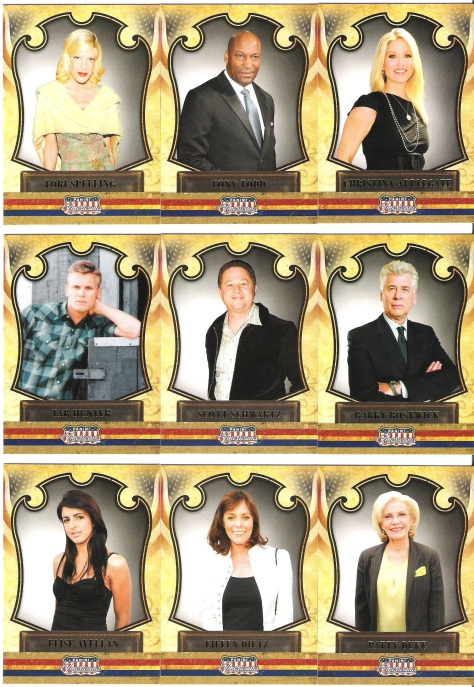 It's the usual mix of celebrities and psuedo-celebrities. If you've gotten a previous release, you know what to expect. 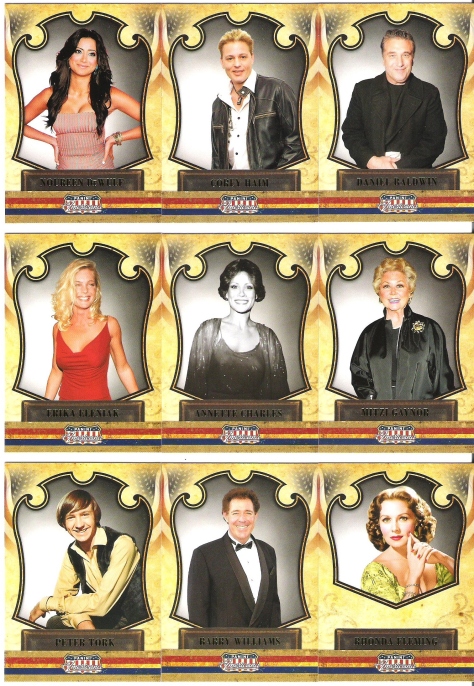 There is so much nerdiness of many different disciplines to be found this time around. 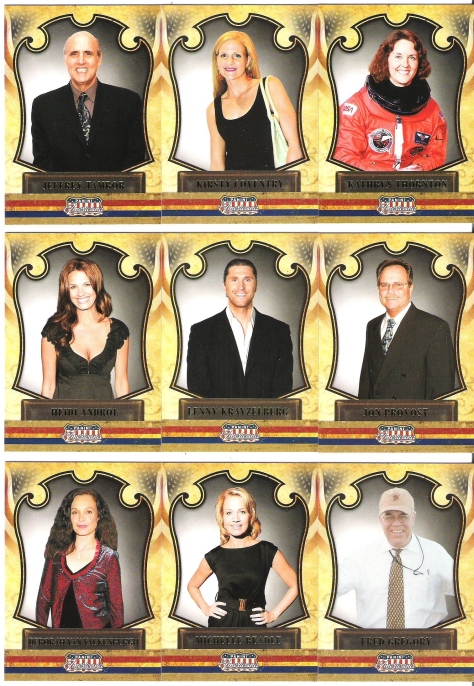 Astronauts, wrestlers, Power Rangers that went on to become bigtime voice actors (not in this blaster, alas), stars of nerdy movies and TV, Beadle(!)... the geekiness is strong in this one. 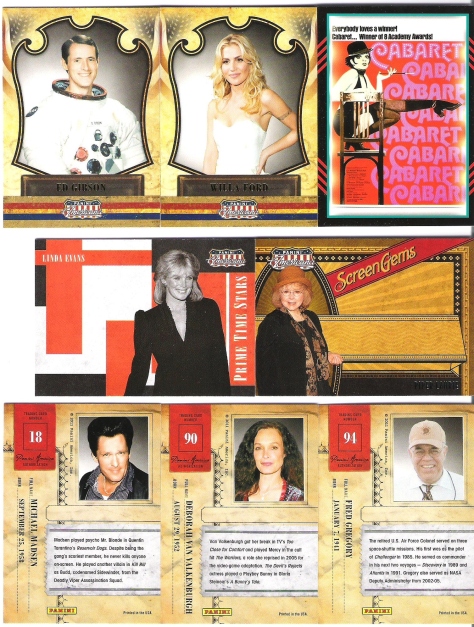 The inserts are meh, but the hits are nice. The poster there is the front. Base card backs are... sparse. 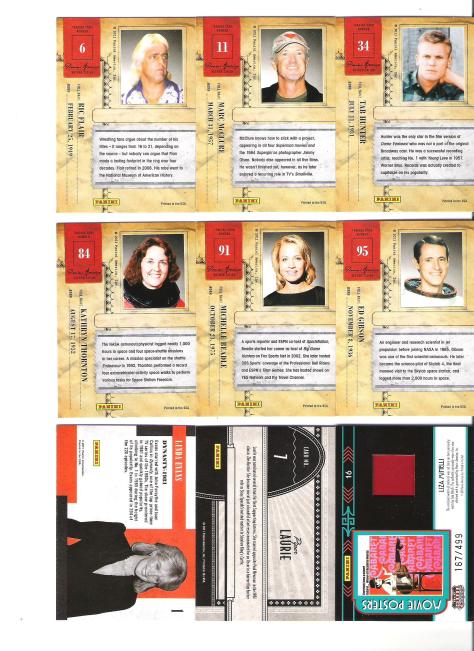 And the back has the swatch, the swatch being something red from Liza Minelli this time. Fun stuff. The Americana blasters were the only cards I bought this month that I genuinely enjoyed. The baseball stuff just felt like going through the motions. This post feels like that too, but whatevs.

Despite the overall half-arsed nature of this post, I really do like Americana and give it a very solid A-.

I’m collecting the base set and will put up a needs list when I get around to it.  Fortunately it won’t be huge.  There were almost no dupes (possibly none at all) between the two blasters.  That was pretty great.  So pretty much everything in the second blaster will different.

Next time, a few more sketch cards.  After that, who knows?  Thanks for stopping by!

That last scan didn’t get edited to size.  How did I miss that?

They are really boring me right now though, Diamond Giveaway site aside.  The only cards I’ve purchased this month that I’ve really enjoyed were the blasters of Panini Americana.  Everything else I should’ve left on the shelf.  The first Americana blaster has been scanned and will be posted up in the near future, but today feels like a sketch card dump post kinda day.  So sit back, relax, and get ready to enjoy some serviceable art! 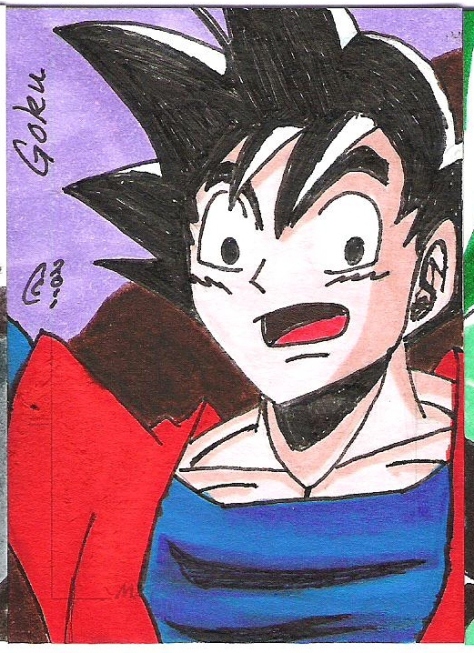 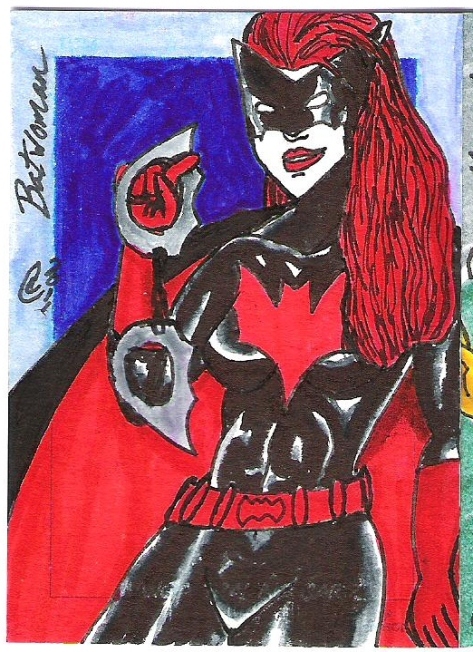 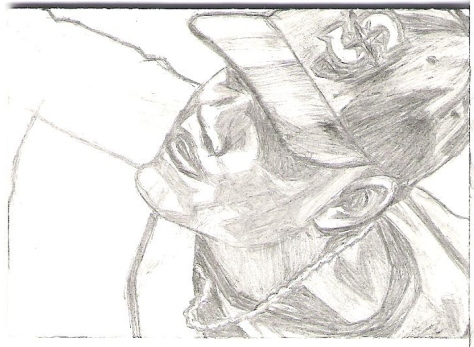 King Felix! On a decoy card. 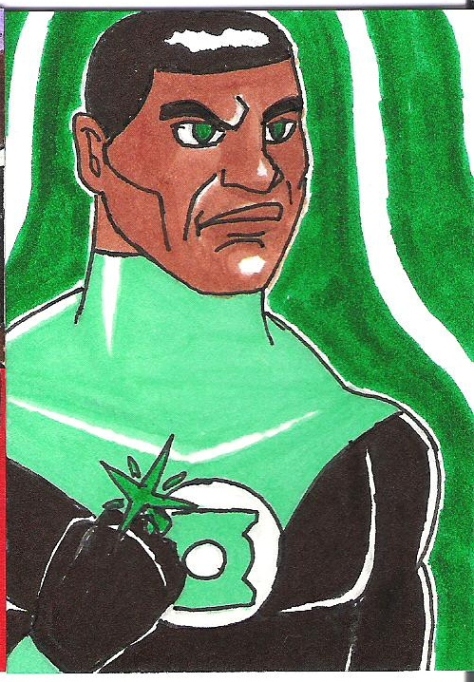 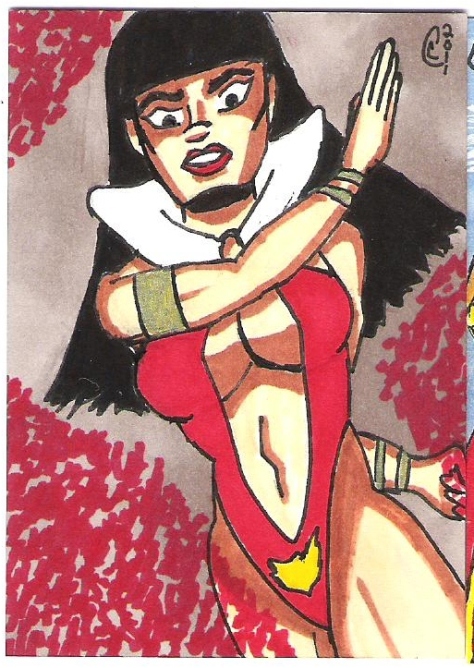 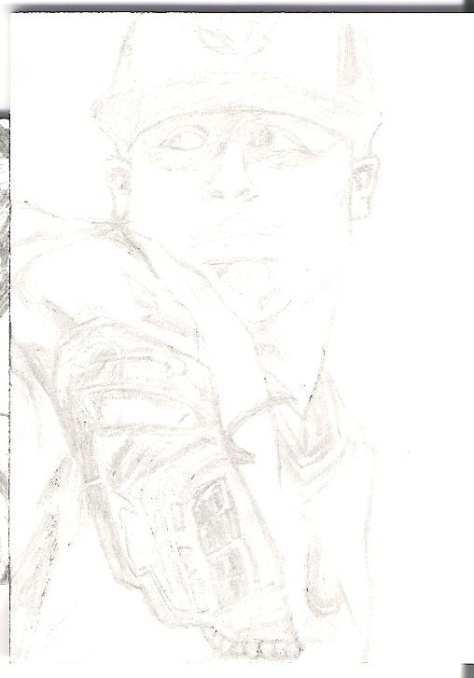 Ricky Romero! Also on a decoy, but one with a non-slick side, so I was able to use my normal lighter pencil on it. Hopefully you can see it somewhat okay. 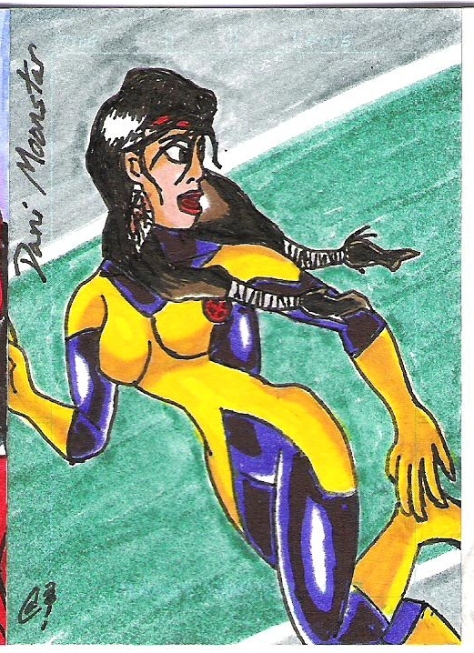 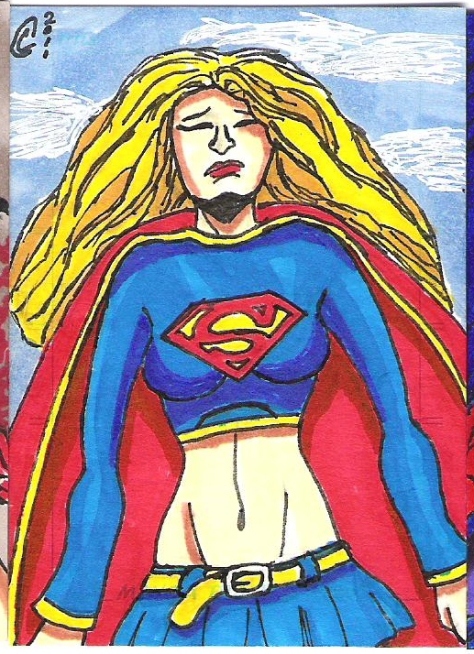 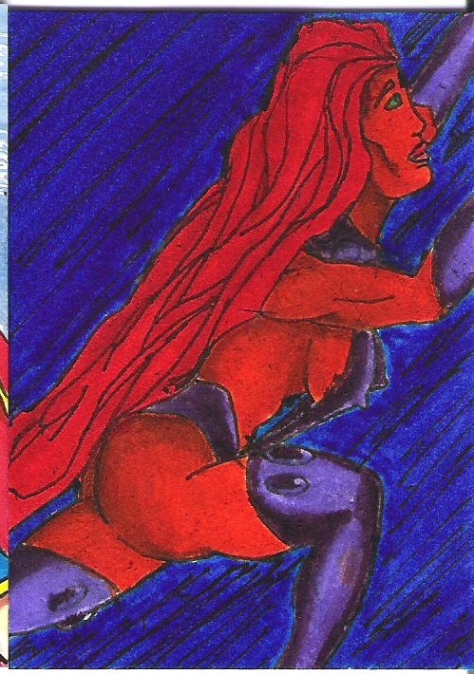 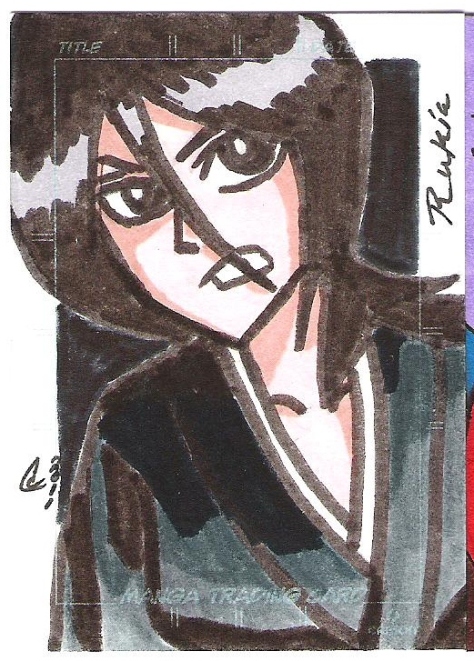 Well, there ya go.  Most of it is for sale or trade.  Inquire within.  Thanks for stopping by.  Next time, a blaster’s worth Americana. 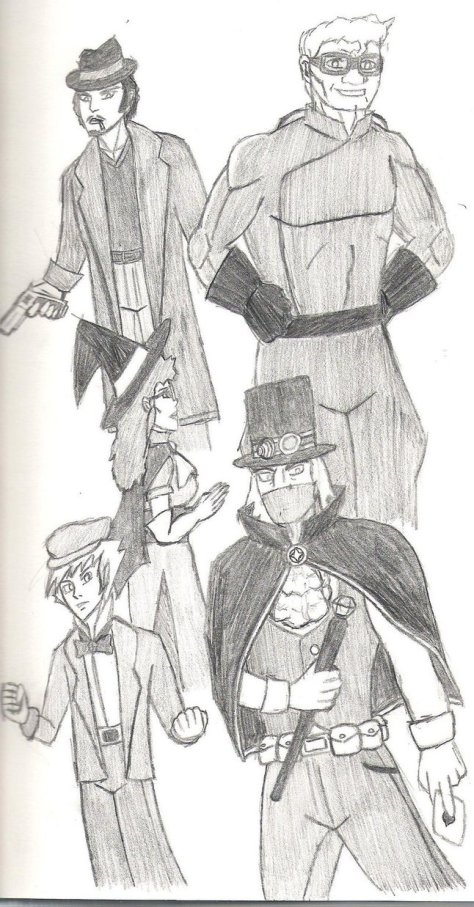 Wasn't much else to do today, so I did this.

That’s right, EGGO omelette. I basically threw something resembling southwest omelette fixins between two Eggos and heated ’em. It’s really that simple. I have card posts, but this just happened to happen, and it’s my blog, so let’s eat!

Just grab a couple Eggos or waffles or whatever you like. Even make ’em from scratch if you want. You may wish to to send ’em through the toaster before you nuke your mix.

Lay down some cheese of your choice on one Eggo and chop up some of your favorite omelette fixins and sammich it all together and pop it in the microwave until hot enough for your liking. Took about a minute for me, but microwave times and how you do the waffly goodness may vary. I suppose if you could probably cut the microwave out entirely if you put it together quick enough after toasting or something. The melty cheeze helps hold it all in place to a degree though, so I dunno for sure though.

I used tomatoes, jalapenos, a pinch of habanero, and mushrooms. Also a lil Franks Xtra Hot and crushed red pepper, because my jalapenos were pretty weak this time around. But anyway, yeah, that’s about all there is to it.

This post was more pathetically short and pointless than I realized when I started it, so here’s a card of Pamela Anderson.  Enjoy. 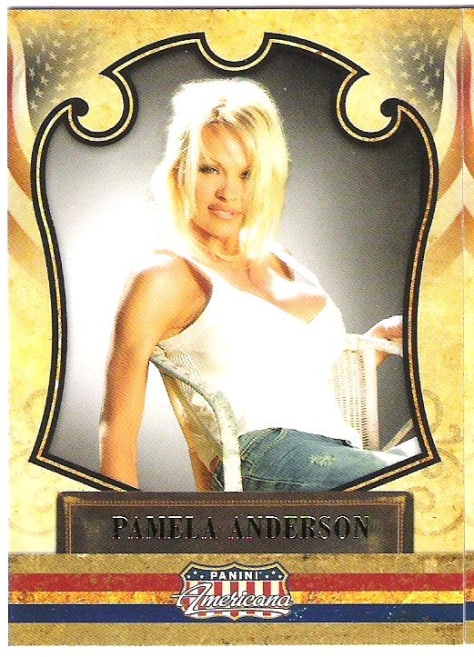 A small flurry of posts is one the horizon even. I have some scans and a precious few thoughts to spew forth onto the internet. Just have to get some fuckery with the courthouse stemming from the jury duty that (thankfully) wasn’t squared away in the next couple days. Until then, if you like my art and you’re on Facebook, go like my page dedicated to it, if you’d be so kind: Link