Better get back to these, the next flea market might be this weekend.

Why Purchased: For the almost-vintage Hall of Famers.  I didn’t even notice the Youk rookie till I had already decided to purchase it.

Keepers: None I guess.  The Griffey doesn’t interest me very much, and the others I can probably find good homes for.  Let me know if one is to your liking, but keep in mind the 1980 cards are not in the best of shape.  I’m beginning to think that pre-1983 cards in mint condition don’t, and maybe never did, exist, because I’ve never seen one.  And the only minty fresh ’83s I’ve seen were pack pulled by me.  Oh dear, I’m ranting again aren’t I?  Terribly sorry.

Notes: I didn’t recognize Youk without the facial hair.  It’s so inherent to him that I must’ve figured he was born with it.

More cards need rounded corners.  I can’t believe we haven’t started moving in that direction already.  How much easier keeping cards in proper condition would be without having to worry about dinged corners.

Feelings mixed on Topps Total, but without any other companies producing any baseball cards of note, it would probably be good to come back during whatever the biggest lull in the card-buying year is.  I guess I’d like it personally just so there would be an easily attainable and relatively affordable rookie card on a clean (if uninspired) design of whoever is deemed the hot player of the moment.

Man, Jesse Orosco looked so young!  No wonder he went on to pitch so long, he was the inspiration for Rookie of the Year, making his debut in his very early teens.  It’s like those “when they were young” cards, except it’s actually his rookie!

I like to think Joe Morgan is saying something all haughtily & getting basic information wrong in the interview taking place on his card.

All I can think of for Jim Palmer is “The hair, man. The hair…”

Mind-Blowing Statistics: In his very first year of professional baseball, Kevin Youkilis had a .504 OBP (in 276 plate appearances), walking 73 times to only 31 strikeouts!

I’m starting to get on a roll, might even get close to finishing before the next show!  Here is the 4th binder page: 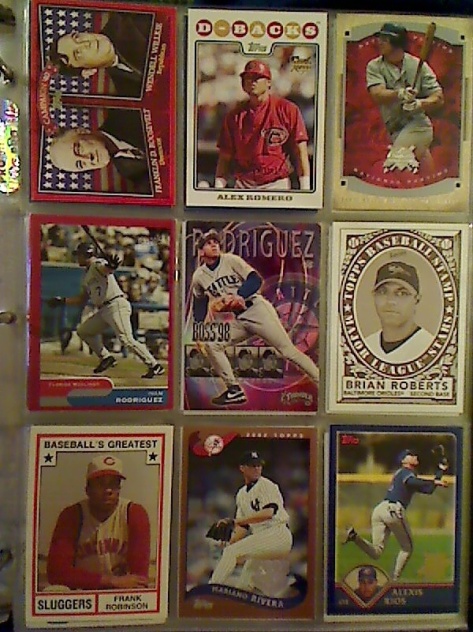 Why Purchased: Because I collect Frank Robinson, and also for the Alex Rios RC & A-Rod Thunder insert.

Notes: There’s something unflattering about Willkie’s photo there, but I can’t quite place it.

The Pudge is an extra thick parallel.

The A-Rod should be extra thick.  It is embossed, like Action Packed, topps Embossed, and those sweet Kamen Rider cards I got from Shot Not Taken a few trades ago (hopefully another trade coming in the next couple months, btw), except it’s a thin as a regular card.  It should be special, embossed cards are one of the rarest of technological card treats, after all.  But with the back all raised up where it is on the front, it just feels kinda weird.

Wow, that’s the exact same design as the Heritage Stamps of the last few years.  The back is mostly blank, brownish cardboard with only the brandage at the very top, “STAMP XX OF XX” and the player’s name directly under it in small print in the middle, and legalese at the bottom.  I’ll show it off when I do a massive card back dump post someday (I like to record a lot of various card backs for posteriority, hehe).

The Greatest Sluggers card is just simple and classy looking.

Rios I just thought a White Sox fan might enjoy.

Mind-Blowing Statistics: I could’ve had this post done two hours ago if I were capable of staying on task.  But seriously though, I figure anyone that isn’t coming here for the cards is coming for the old Benchwarmer posts from back in the day (people still get here via searching Brooke Morales and Jaime Hammer every single day), and everyone who is coming for the cards already knows about Frank Robinson’s legendary exploits already (last to pull off the Triple Crown, MVPs and championships in both AL & NL, etc).  Because nobody ever comes for the art.  Seriously, I’m not even that bad, but my art posts barely do any better than days when I don’t post at all.  Wait, what were we talking about?

Heh, actually I just revealed a bunch of interesting stats in that incoherent babbling.  But now I must go.  I’ve gotten over the violent ills, but these allergies are making me cry harder than Field of Dreams, Rudy, and Serendipity combined.  Don’t judge me on that last one.  Best damn romantic comedy since Waiting to Exhale, it is.  I should probably just shut up now.  Seeya. 😛

Wanna have a catch?