After I returned my bike, I planned to just get something cheap to break the fiddy dollar bill I got in return so I could re-deposit half of it.  My first four packs of 2015 Topps weren’t very good though, and the dupes were already starting to pile up.  So I bit the bullet and grabbed pretty much the only other thing of interest to me that Target had: a $20, 20-pack (plus bonus) repack box that was almost completely devoid of junkwax.

It sounds like a pretty lame bonus, but it turned out to be significantly better than expected.  Take a looksie, won’t you?

Poker chips are a somehow apt metaphor for pack-bustin’..

Turns out that gold-bordered glow-in-the-dark Tulo is actually pretty rare and reasonably valuable.  A run through the very few sold listings had them going for $5-20 a pop (with Jeters in $50 range), depending on the player.  The only two gold borders up for the bidding at the time were a Travis d’Arnaud Gold/Glow-in-the-Dark and Jose Reyes Gold/Blue, which sold for $13.01 and the opening bid of $9.99, respectively.  So this seemingly silly, innocuous bonus item was probably the hit of the box.  But this little repack had more going for it than just the bonus.  Much more, as you will see below.

Every once in a while, the gamble pays off.. 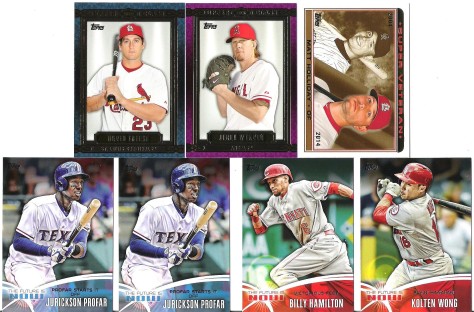 Topps Series One proved much more interesting than Series Two even without the sweet Zack Wheeler relic.  Better inserts, and the Target Red parallels aren’t something I see much of, even if there weren’t any huge stars.  Cosart, JD, and the series dos Hoz aren’t too bad though, and everyone is at least pictured (Cosart became a Marlin at the trade deadline) on teams that should trade easy enough.

GQ was meh, as it usually is.  But I never buy it anymore, so it was nice to find a pack in there.  It’s a meh that tastes a whole lot better when it costs $1 than when it costs $3. 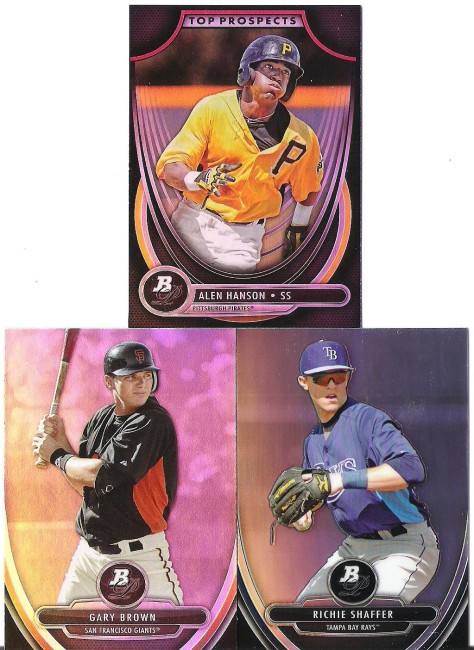 Bowman Platinum is the shiny version flipside to GQ’s old-timey style pointlessness, but it has been fairly forthcoming with the marginal prospect autographs & such for me, especially in 2012.  I don’t buy at full price anymore either, but it also makes for decent repack filler. 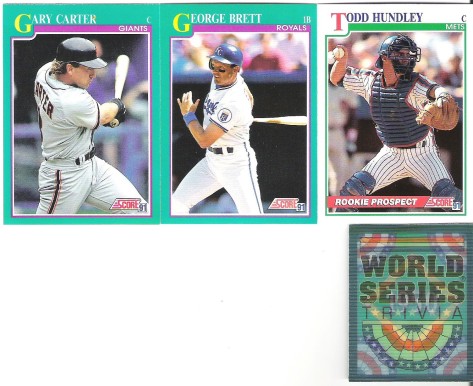 Mercifully, the only junkwax..

1991 Score wasn’t terrible, as junkwax goes.  A RC of a solid player who had nice, lengthy career that included a couple monster seasons and a stint with the Cubs & a couple late career Hall-of-Famers is the best you can really hope for in a pack like this.

My resemblance to Holmberg is kinda uncanny..

The repack was heavily weighted towards Heritage, which is another product I’d never normally buy on its own, but am quite happy to get in numbers in a repack.  Despite my snarking to liven up the uneventful rack pack in my first post in ages over at APtbNL, that’s probably what ultimately made me decide to keep the repack while I was wandering around Target desperately trying to find something cheaper.  The McCutchen is fantastic.

Outside of the red Yadi (my only complaint about this box is all the damn Cardinals inserts!), there wasn’t really anything all that special in there.  Just low level inserts & a trio of highly trade-able SPs.  I’d already pulled my hits before I got to them though, so it’s cool. 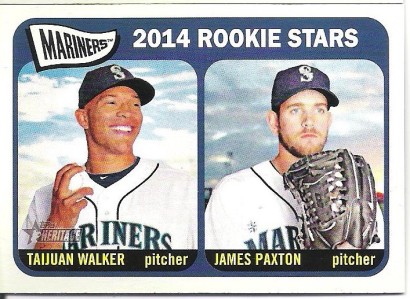 From the rack pack..

Quite possibly my only keeper from the entire box came out of the rack pack, so that helped too. 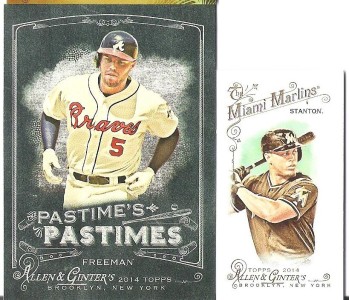 Finally, main event time.  Allen & Ginter is consistently the best, most fun product Topps puts out every year (though 2014 had some legit competition for once, in the form of Finest and Stadium Club).  I’ve pulled a few hits & some rarer minis & other such nonsense (sea monkey card, flower card, World’s Biggest Mini SP) over the years, but the following, while not all that extraordinary, might still be my best pull to date.  Easily top-3.  Feast your eyes…

This Jason Kipnis is the first auto I’ve pulled out of retail in seven years of buying Allen & Ginter packs & blasters, and it is a beaut.  The funny thing about this outstanding repack box is that I had just started carrying that Prosperity Bean TJ sent in my Nerd Week prize pack that very morning.  Maybe it’s legit, maybe I’m just a superstitious and cowardly lot, I dunno.  I’m mostly just happy to have pulled some nice stuff out of a repack after the disaster that was January’s Greatest Chase repack/turd.

Anyway, that pretty much wraps up this post.  Let me know if anything strikes your fancy, and thanks for stopping by.