And what a fun one it was.  It did get off to a rocky start, due to me getting back so late from the parents’ place the night before, which pushed everything back a bit and put them a little behind schedule to head out of town to attend the 1st birthday bash of my baby cousin or nephew or something.  I’ve always had trouble keeping familial relations straight.  But once they were on their way and I was left to my own devices, it was a blast!  I took many pictures, with a digital camera this year.  I planned ahead, because last year’s photos are still trapped in the nether regions of my phone.  And that’s terrible. 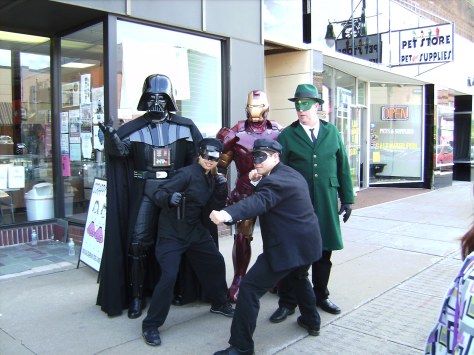 These were the peeps in costumes.  Darth Vader and Iron Man were there last year, but it doesn’t change the fact that their costumes are amazing, not that team Hornet aren’t impressive in their own right.  I later found out the guys in the Vader & Iron Man costumes are father and son.  Kato apparently works at the comic book shop we’re standing in front of, and was super friendly and outgoing, despite mentioning running a rather severe lack of sleep.  Kato’s daughter from the comics and Green Hornet came from out of town (and I believe Hornet is the same guy that played Batman last year).  The left fairly early, but not before I captured them all on SD card plenty of times. 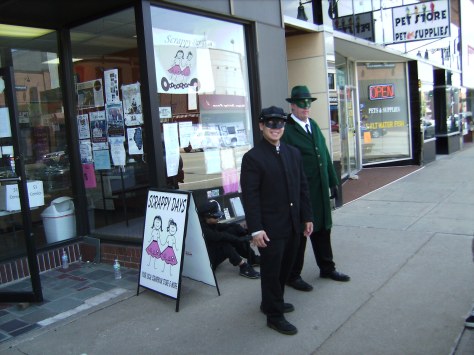 The Green Hornet and the guy that does all the work. 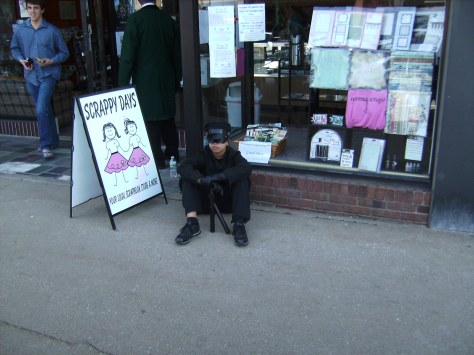 During a lull in the festivities... 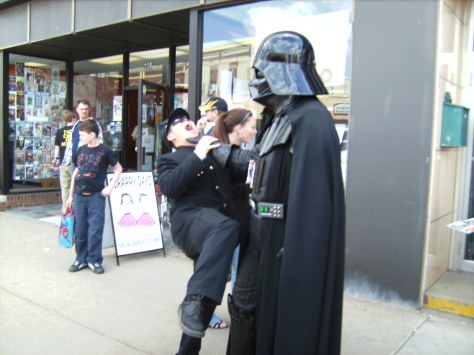 Oh noes! Our hero is in trouble! 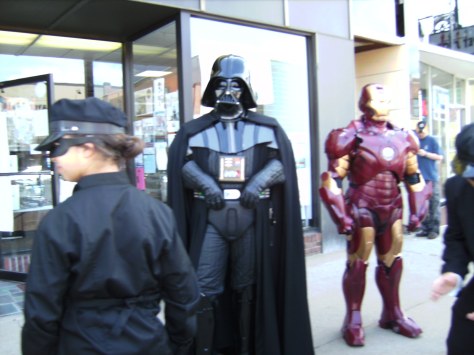 It should be noted that towards the end of the day, the costumed characters presence nearly caused a traffic accident.  It’s funny now, but was kinda freaky when it happened.  Speaking of kinda freaky: 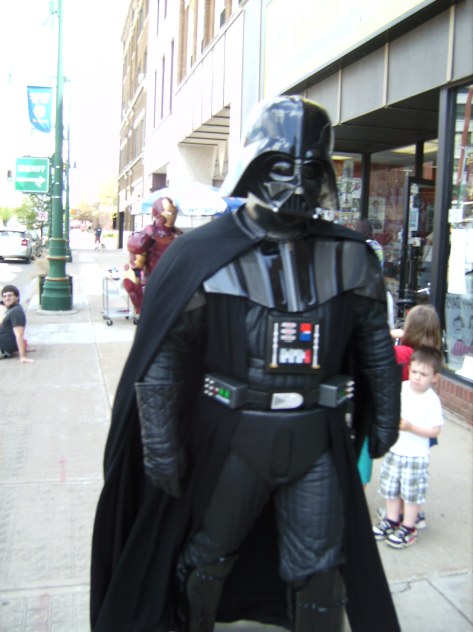 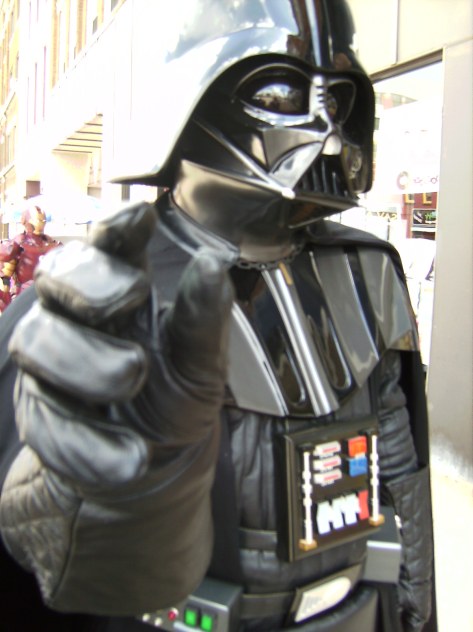 Parts of the thing on his torso there lit up.  That was pretty cool.  Seriously though, my heart was beating a lil harder while I was getting this shot, mainly because of that scary methodical approach. 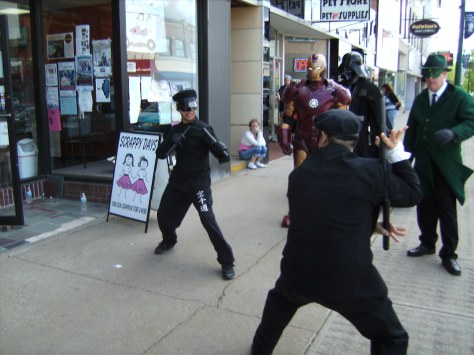 From this little interlude, I learned that both of them have some level of legit competence with nunchaku. 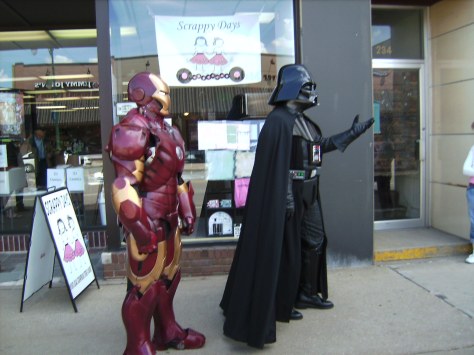 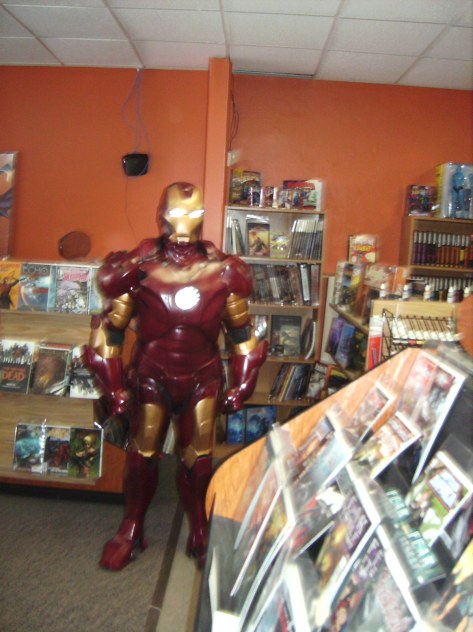 The eyes and chest thing glow!

All told, between both places I ended up with 12 free comics, bought all of the Batman Beyond mini series that was available (#3-6) because I’m a sucker for Batman Beyond, picked up two Marvel blank cover variants (that the owner of the shop said I could bring back to display after I finish them), and a cool keychain I’ll post when I, or someone I care about, needs a little hope to keep on keepin’ on.

Besides the free comics, local comic artists were on hand to work their magic at both places.  At the more purely comic book shop, where most of my photos take place, the artists were doing free somewhat quick but fairly detailed black & white sketch covers for anyone who purchased a blank cover variation and wanted one. 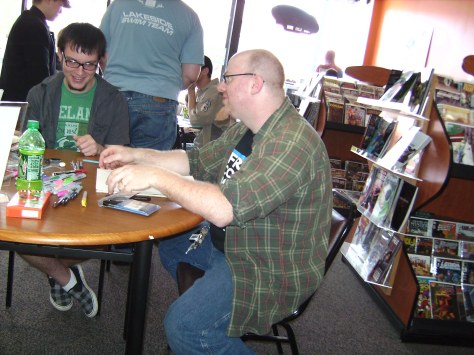 This guy was there all day, taking commissions and working on blank variant covers for those that wanted them. I believe he is also the father of my little brother's high school ex-girlfriend. It's a small, small world. 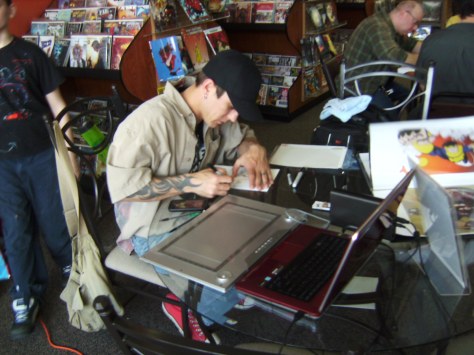 This guy came in later and did his thing for around two or three hours I think. I ended up befriending him when he took a look at some of my sketch cards and seemed pretty impressed with my work.

He also showed me how to make my inking suck less.  Quite timely too, since I really started looking into that very thing recently.  He gave me one of his cool little business cards and asked me to keep in touch and email him links to some of my artings online, which is exactly what I’m going to do once I get some sleep.  Or if I ever get some sleep, whichever. 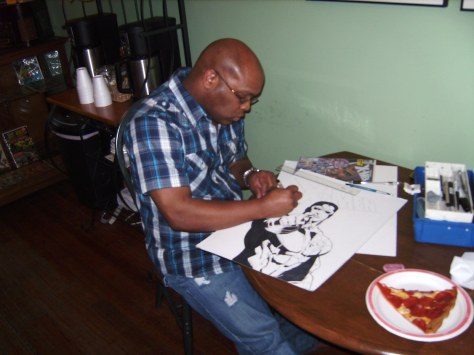 Finally, this guy was at the other place. I didn't catch his name, but he seemed like a pleasant fellow, and was doing some excellent work. Check out what he's working on there (if you can see past the pepperoni lovers' pizza)!

Seriously though, it was really dumb of me to turn down a slice of that pizza when it was offered to me.  Pizza Hut is a rare treat for my perpetually broke arse.

So yeah, even though I feel like I used to after Jr. High soccer practice and won’t be able to move when I get up later because my thighs are burning with the force of a thousand suns and will completely lock up on me whilst I slumber, I couldn’t be happier about it.  It was a truly fantastic day. 😀 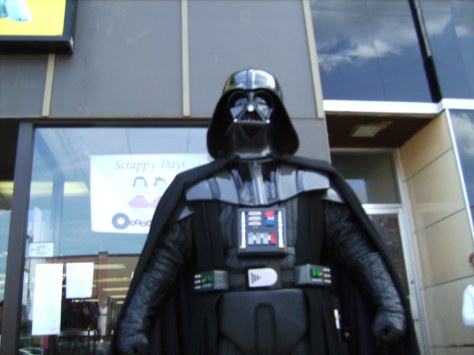