I got a couple fat packs of ’09 Topps Chrome at Walmart, cuz that’s what was available.  Seven cards and I guess two inserts or refractors per pack.

175 Bobby Parnell Mets RC- I am so sick of pulling Niese & Parnell rookies this year… I guess Max Scherzer found his anti-collection successors.

129 Jeremy Bonderman Blue Refractor #ed /199- Blue refractors are nice, and less… odd, than bronze. For a flagship at least.

164 Ryan Zimmerman X-Fractor- Who needs an arbitrarily limited regular refractor of random color when you can have this?  The X-Fractors this year are officially SICK~!!  Gone is the s***ty over-the-top “static bling” of recent years, replaced by this much more subtle look… THAT MOVES~!!  This is the closest thing I’ve seen to an Atomic Refractor in years.  More of this plz.

Even if 2009 Topps Chrome’s design was total arse, it’d still be somewhat worthwhile entirely on the strength of it’s easily obtainable X-Fractors.  Fortunately, it looks good and has good photography from what I’ve seen too, so it’s a big winner all-around.  This probably won’t be the last of this I pick up, it’s right up there with Upper Deck X.

Also, to make up for lack of Chrome pictures (not that a scan could ever hope to convey the epicness of this years almost Atomic Refractor-quality X-Fractors), here’s a couple quickie sketches I did with a sharpie while sitting around downtown earlier this month: 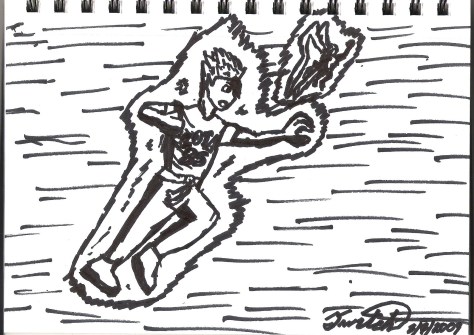 Not too bad for 40-50 minutes combined when I’ve never done straight ink before I guess.