Here be the first of the two 25-card $1 grab bag pack things.  This be the football version.  Here’s the pack in order (accomplishments via Pro-Football-Reference): 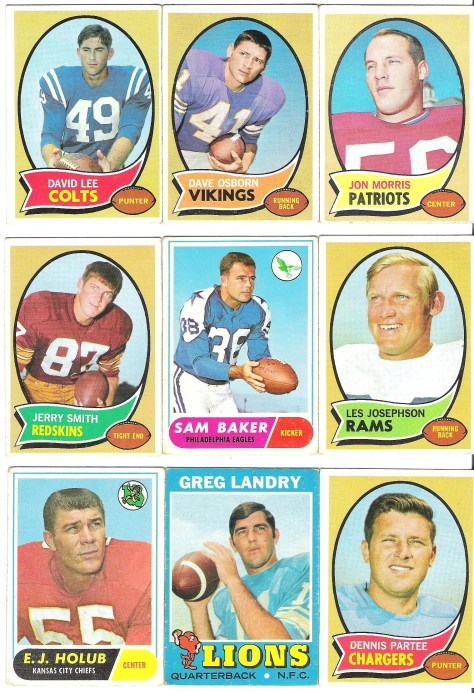 Vintage Hall of Famer!  Yes, this was basically the best $1 grab bag pack thing ever.  Pretty much puts that McDonald’s dollar menu commercial to shame, eh?

Pretty much everything but the Jerry Rice is available for trade.

That’s it for this one.  So long, and thanks for stopping by!

They had a golf five packs & an autograph for $9.99 thing at Shopko, and since it would basically be free after discount, I thought what the hey and picked it up.  The autograph cards on the front were Tiger Woods, Chi-Chi Rodriguez, and Adam Scott.  No way in hell are you gonna get a Tiger auto, and Chi-Chi’s pretty well-known, and Adam Scott is top five in the world-caliber apparently, so it’s hard to expect to even get anyone on their level.  Well, I may have surpassed them both with the auto I pulled… but first, the packs:

Let’s start from the start.

50 Dennis Paulson- The back basically describes him as the .220 hitter with little pop or other redeeming skills that manages to hang around for a lot of years.  But he won a tournament in 2000 and did respectable in the Masters that year, so he’s got that going for him, which is nice.

70 Adam Scott Young Guns- Speak of the devil… nice looking card too.  Upper Deck at the height of it’s powers.

174 Thomas Bjorn Victory March- Holy schnikies!  This card will hit the scanner when I have the chance.  This has to be in the running for best looking subset EVER.

176 Tiger Woods Tour Time- Upper Deck was on fire with the subsets.  Another nice one.

131 Fred Couples Defining Moments- This one almost rivals the Victory March one from above.

The pack 2 cards were not in awesome shape.

105 Jesper Parnevik Leaderboard- Getting an Upper Deck MVP vibe from this one.

3 Sergio Garcia- The regular base cards are classy in ’02.

65 David Toms Leaderboard- One of four subsets that combine to fall one per pack.

MC-38 Karrie Webb Major Champions- 1 per pack insert.  Yet another classy design, this one on nice shiny foil.

NOT POSTED DUE TO PACK GOING MISSING…

I think there was another Karri Webb in it.

*drumroll* And the autograph is….

2002 SP Sign of the Times Bernhard Langer!!  Holy crap, he’s pretty good.  Probably a better pull than Adam Scott, and at the very least, a more successful golfer than Chi-Chi.  78 professional tournament wins on various tours, including two Masters, & the very first guy to be officially ranked #1 in the world.  Check it out.

And finally, a dollar pack of soccer cards from the dollar store.  It was right on top and waaaay thicker than the other packs.

MM-28 Sharlie Joseph (New England Revolution) Materials swatch of *something*- They don’t specify what the swatch is (really, you just have to see the CoA for yourself, it’s a special kind of vague), all I know is that it’s so soft that if you had a blanket made of the material, you could sleep like a baby on a freakin’ bed of nails.  It’s soft.  And I’m actually vaguely aware of who Sharlie Joseph is.  I saw a game on I think ESPN2 pretty recently that he was in (I think going up against Seattle; it got pretty chippy if I recall) and the announcer dudes mentioned him a bunch, so that’s pretty cool I guess.

182 Chris Leitch (New York Red Bulls)- They’d have an awesome name if it wasn’t named after a sh*tty energy drink.