Here is the other package I received (last) Monday.  These are from Too Many Grandersons hisself.  Behold! 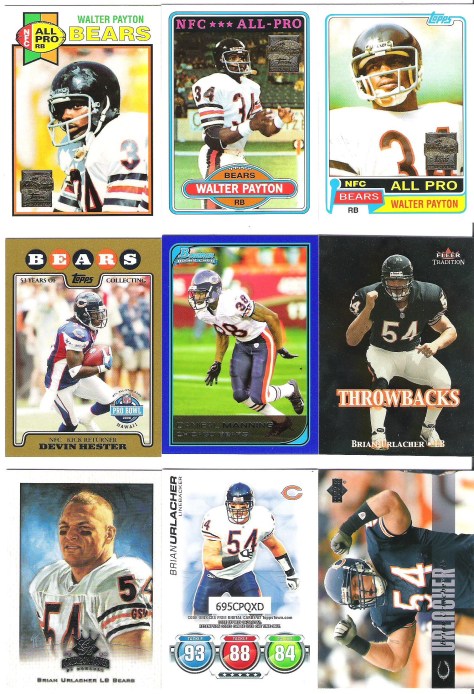 Suh-weet Walter Payton reprints, Gold Hester, base blue Manning parallel /500, Urlacher (foil and thus poorly scanned) insert from rookie year, and more Urlachers (have at that code)! How much better does that blue parallel look than the boring black borders that they've trotted out most of the last 10 or so years?? A set that looks that good I might actually consider collecting, as I once did the the '02 Gridiron Kings (even picked up about half the Legend SPs in a lot once upon a midnight's dreary).

More Bears! Greg Olsen, Bernard Barrien black parallel from one of the single greatest set designs in the history of cards, Cutler, some rookies, and my personal favorite, my first and Julius Peppers as a Bear.

Last of the Bears... The more I think about, the more I think Rex' dad was right about the Bears mismanagement of QBs, especially in the Super Bowl. Fortunately, in getting Martz, they seemed to have wised up to some degree. Not sure I like the total abandonment of the running game though. Somehow Bronko was the only card I already had amongst the Bears.

Moving on to baseball now… 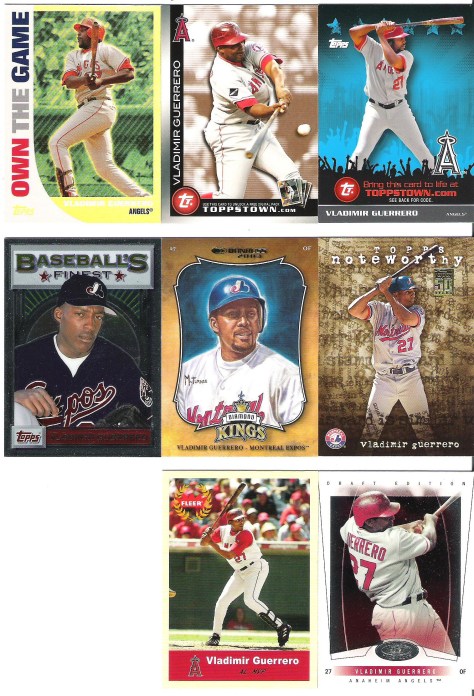 Vladdy! I may have the Own the Game & one of ToppsTownies, but the rest are new to me, three I've never even seen before. The Diamond King is the gold parallel version #'ed to /2500.

Ichiro! Don't get a lot of him in trades. The '04 Own the Game in the middle just insane. And a rookie of the BEST catcher in baseball. Well, he's in that elite group with Mauer, McCann, and Victor Martinez (and maybe Posey in a year or two) at the very top anyway.

And a few of my favorite Cubs to finish it off. I really hope Big Z sticks around if it's between keeping him or Dempster. In fact, I think I'd just rather Dempster leave regardless. Something bothers me about him.

Thanks for the great cards!  I’ll get together something worthwhile to send in return… eventually. *sigh*

Get excited, it’s finally time to do a box breakdown.  This is for 2008 Donruss Threads Baseball, if you didn’t catch the title of the post.

I’m sure there’s plenty of reviews & stuff out there already, so I’ll make the summary bit short & sweet.

Threads is all legends and prospects with nothing in between (though being from 2008, some prospects have already made their MLB debuts), so if you ain’t down with that, I’ve got two words for ya: DON’T BUY. 😛

Not being licensed by MLB, there aren’t supposed to be any MLB logos or team names anywhere on the cards, but the attempts to remove them from the photos are often half-hearted at best, though some are fully removed.  Overall, lack of team names and weakly obscured logos don’t detract from things, though the fully removed ones are slightly jarring if you’re paying enough attention to notice.

As you can see, any partially obscured team names are left alone, and most hat/helmet logos are half-assedly dealt with at best.

The design is pretty decent I think, and I like how deep into the legend barrel they dug to pull out Frank Howard and some others, including Hall of Famers, that you unfortunately rarely see on cards nowadays.  It definitely allows this set to tap into a bit of the epic fun factor of the topps Archives & All-Time Fan Favorites sets from the early aughts.  It’s nice to see Pete Rose and Shoeless Joe too.

The short set is 100 cards, and there are 120 per box, of which about 14-15 will be inserts/parallels (more on that shortly).  That leaves room for a few duplicates in every box, but you should still be able to complete the set.  Not so fast my friend.  I came up well short of the finish.  I haven’t gotten around to collating it yet, but I think I came up at least five cards short of the complete set. 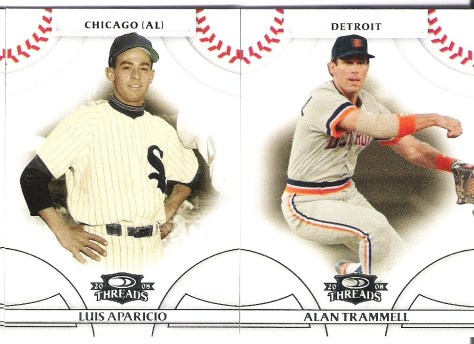 Now then, the regular inserts and parallels.  You are promised 10 per box, one each of the following: Diamond Kings, Century Stars, Century Legends, and Green Century Proofs.  The other six are a random assortment of the above, as well as #ed base parallels, College Greats, Dynasty, Generations, and I guess Baseball Americana.  With six being random, there’s a good chance you won’t pull everything.  I didn’t get any Baseball Americana or Generations in my box, whereas Drew from drewscards pulled two Baseball Americana, but no Generations or Dynasty inserts.  I pulled one of the latter. 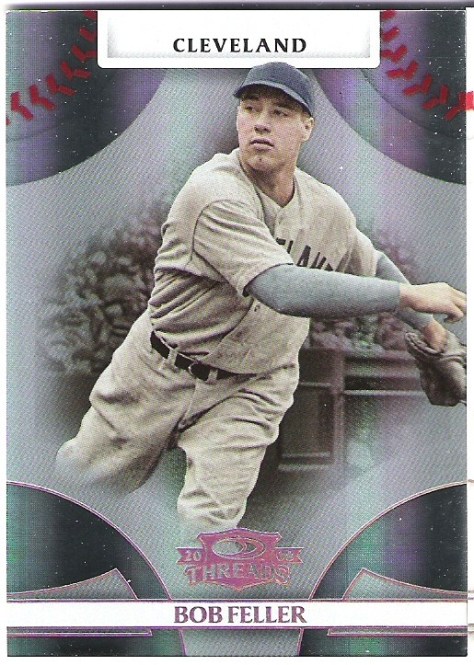 My awesome base parallel pull. 😀

Pulled three Diamond Kings. Nolan Ryan and Ernie Banks are #ed /250 because the Threads logo is shiny I guess. :d

There are a crap-ton of Diamond King parallels, starting at /250.  Fuller is the regular base version, which isn’t numbered.  They used the same picture for Mr. Cub’s Diamond King and Century Legend (The two Century stars I pulled share the same photo as the players’ respective base cards, as well).  The photo recycling thing is annoying to start with, but within the same set?  Pathetic.  Come on, man!  And for the love of pizza, quit using the same picture of Joe Morgan already!

How many freaking times has that same picture of Joe Morgan been used with various cropping and/or filtering since the beginning of the '00s now??

It’s a cool card & all, but that picture’s been used on seemingly every single Joe Morgan card made since 2000.  Ask Field of Cards about that.  Poor guy’s haunted by that image.  He was even in attendance for my live box break on Jtv when I pulled this. 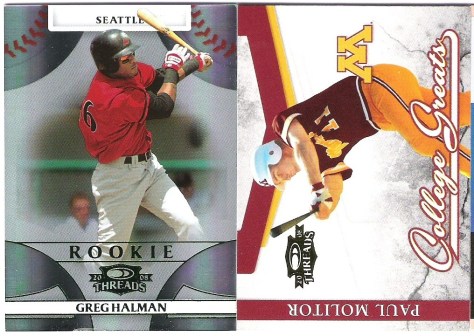 Halman came out of the pack in bad shape, with a dinged corner damage along the bottom edge.  Disappointing, and the damage will continue…

Bonifacio was pretty beat up right out the pack, and Hayenga wasn’t minty fresh either, which is unfortunate because it’s the first time I’ve ever pulled the first or last of a print run.

Now, you see I pulled three autos.  There were two game-used cards, so that means I pulled an extra hit.  Donruss was always cool like that.  Getting more than promised seemed to be the rule rather than the exception for them.  Here’s my other two hits:

My weak link of the box.  Dale Murphy would be a really cool pull usually, and I guess he kinda still is, but considering how great the legend checklist is, this is probably one of the weakest possible legends you can get.  And, this is the only legend hit I got.  Oh wells.

Time for the grand finale! 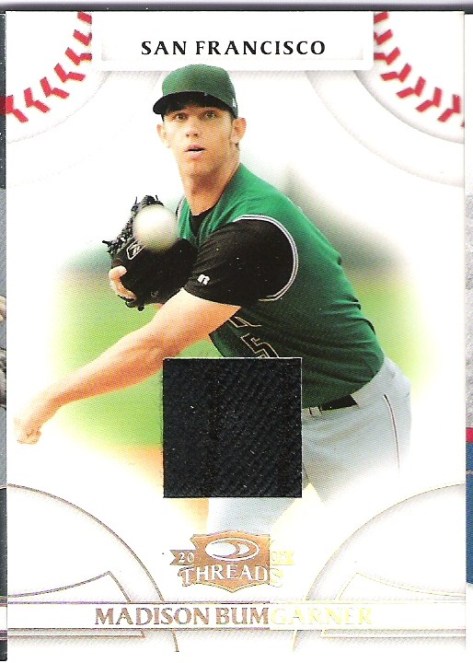 Even at full size it’s kinda hard to see, but there are two parallel grooves in the swatch running the length of the swatch vertically.  I dunno what the deal is, but the swatch is super thick too.  It’s practically bursting from the window.  Whatever the case, I’m calling this a patch… err, being Donruss, Prime Jersey (which is probably more accurate than calling most special swatches a “patch” anyway), until proven otherwise. 😛

Price: A This is a great product at under $50.  It’s fun and there’s a fair chance at a great pull.

Condition: C I think only the three cards were noticeably damaged, but they were kind of important ones.

Pulls: B Bonifacio has made it to the majors already but not been great.  Hayenga has potential.  Patterson is going on 27 and hasn’t made the show yet, though he might be decent if he ever does.  Murphy is cool but a weak legend.  Bumgarner is easily the hit of the box.  The regular inserts and the Bob Feller parallel are what bring it up from a C to a solid B.

Fun: A+ This was easily the most fun I’ve ever had busting a box of cards.  I may get another box of Threads in the future.

Final Grade: Solid B It has it’s flaws, but it’s just a fun product.  You’ll be close to the complete short set even if you do get too many dupes, the regular inserts are fantastic, there’s pretty decent big hit potential for the price, and it all looks pretty good, sticker autos aside.  There is much to like here.