This is probably finally, mercifully the last call for this blog.  Maybe an out-of-habit shill here & there whenever I launch new ventures or whatever, but yeah, this is intended to be the last meaningful post from me here.  Here is the key word.  While I’m not going to be posting on this blog anymore, I’m still going to be around now & then, making trades & hopefully taking commissions, and maybe even blogging a little bit.  But said blogging is going to be done on tumblr from now on (first post should go up sometime in the middle of the night).  I feel like it’ll be easier to post stuff there without the pressure of coming up with an angle to make a full, wordy post, and that might make me feel comfortable enough to post more regularly.  People might actually pay attention to my blogspace arena if I don’t randomly disappear for months on end, right?  Right?  Bueller?

Anyway, I’ll leave this here blog thing up for awhile, if not forever.  It’s a dodgy mess full of half-baked, unfinished series and weird random asides that happen once and are never about again, even by me.  Buuuut… there’s still plenty of cool shit on here worth rememberizing and someone might stumble upon it someday and find something that’s worth their while.

In closing, I just wanna say thanks to the handful of folks who semi-regularly stopped by & had nice things to say about my art & stuff.  Hopefully, once I get situated and the tumblr is showing up on the blog roll and everything, I’ll see some of you pop up in over there at some point.

I guess that’s all for now.  Hopefully my crappy little blog has only been a waste of your time in the best possible way. 😉

It occurred to me the other day my collection needs some restructuring.  My tastes have been weighted more towards non-sport/multi-sport offerings/pro wrestling offerings of late.  I’ve also come to realize a fair number of my collections are of players I don’t really care about very much.  The expectational baggage of some of those collections are wearying and only serve to keep me from things I like better.  So some full-on collections are being reduced to Single Page Sensations, and some Single Page Sensations are being dropped entirely.  There will be a small number of new things will be added to the lists, however.

So here’s how it shakes down.

• Ernie Banks, Starlin Castro, Matt Forte, Brian Urlacher, Charles Tillman, LaDainian Tomlinson, Allen Iverson, Derrick Rose, Deron Williams, and AJ Lee are now Single Page Sensations.  Whatever I decide not to keep will be available, though that’d just be base and low-level inserts in most cases.

• Banks and Castro are governed by similar rules to Rod Carew.  Banks gets a page each for vintage and modern.  Starlin gets one each for his RC/Prospect years, later inserts/parallels, and hits from any year.

• Chris Carter, Jason Heyward, Dave Winfield, Robert Griffin III, Steven Jackson, Maurice Jones-Drew, Julius Peppers, Julius Erving, Danny Granger, Scottie Pippen, Tamina Snuka, and Kaitlyn are removed from the collection.  Though a Trifecta of any of them would still be welcome, virtually all of the few cards I have of each player/wrestler are available for sale or trade.

• The stickers and Lawler sketches from 2012 WWE Heritage, and the mini master set of 2012 Panini Prizm baseball has been added to sets, though Prizm still needs filled in.

• I also attempted to organize the pages a bit better by breaking down baseball and football into Cubs/Bears and other players, and separating BenchWarmers from non-sport.  They are kinda their own (sexy) beast.

That’ll do it for now I guess.  Hopefully ratcheting down a few collections will have the added effect of quality over quantity in the long run as well.  Only having a single page to work with, and pressure to rush into completing it in a timely manner, might push me to try for nicer cards when they cross my radar, and reignite my love for some of these guys.

Oh, here’s a card on the way out.  Eve Torres autos finally fell into my price range after she ditched the WWE. 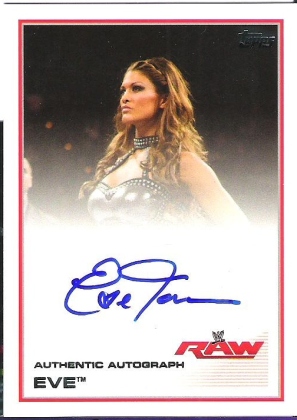