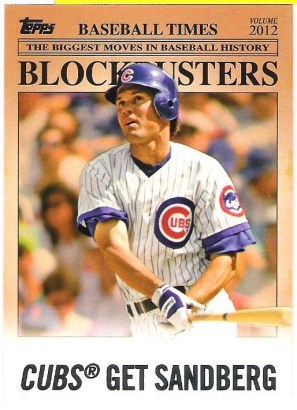 Yes indeed… Having successfully fished for artistic complements, now we’re going to do an actual, honest-to-goodness trade post.  I’m no good at getting these up even when I trade regularly, but here goes.

These come to us from Brad’s Blog.  Let’s have a look! 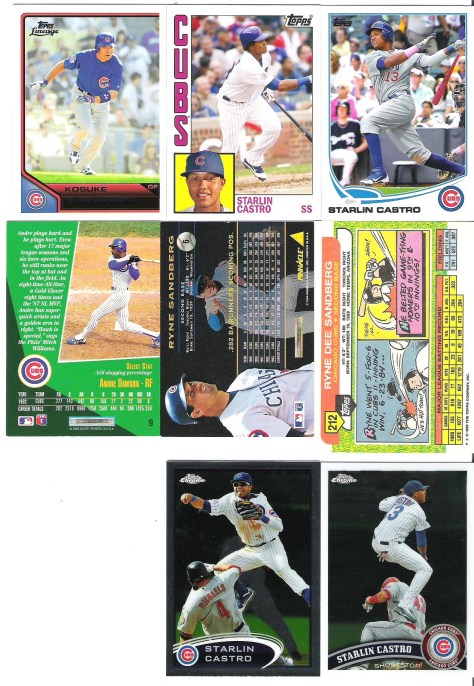 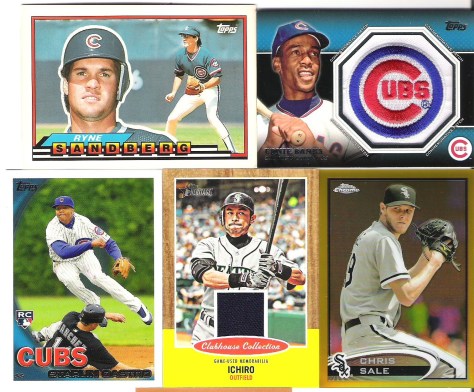 Love dat Ichiro, although I’m unsure where exactly they pulled the black swatch from (the undershirt?).  But anyway, this is only my second relic of him even though I’ve collected him basically since I started blogging in back in the long long ago of 2008.  The manupatch is one Topps’ better efforts since they started doing them, in my never humble opinion.  The ® being on the patch itself also greatly amuses me for some reason.  And the Chris Sale is #’ed /50 and is a fantastic addition to my newly reinstated Single Page dedicated to him.

Seeing as this will basically be the first time I have managed to get out during daylight hours since it dipped below zero for three days straight a couple weeks ago, my end of this deal finally going to go out today.  It was supposed be out immediately before that stretch of frozen hellscapedness, but I didn’t make it out until like 8pm that Sunday, and my sleep cycle has been super broken ever since.  I am still a wreck of a human being, in case you were wondering.  But I did throw something extra I remembered I had that will hopefully make the wait a little more worthwhile.

That’s all I got for now.  A few other trades are being prepped for February, & I might be able slip one more small one into this month.  Who knows what happens next?

… Until I start writing it.  I’m barely mentally coherent and can’t quite think of anything specific to say (I for one blame this ridiculous heat and dis brokeass recliner hurting my back for my total lack of posting energy), but I feel the need to say SOMETHING.  So, here goes whatever.

Nothing has happened as yet with my Black Diamond Die-Cut on the topps Diamond Giveaway site.  Haven’t even gotten many offers on it.  I’ve picked up three regulars via trading though.

I had to let my ’75 Bill Madlock go earlier today when someone offered a Yovani Gallardo for it.  Just couldn’t refuse that.  I also scored a Ricky Romero a few days ago from haphazardly offering up my ’67 Dick Schofield, ’74 Walt Williams, and ’91 Luis Rivera for just about any Diamond Die-Cut I had even marginal interest in and/or could easily trade once I have it in-hand if I can’t get one of my needs on the site.  I sent out a mess of only slightly more focused trade offers for each when the sun was going down.

Before that, doing the same incoherent-but-effective trade offering with a ’73 Johnny Briggs and ’69 Chuck Cottier landed me a Billy Butler which over the course of a single day became a Carlos Santana which finally turned into my first definite keeper in Vlad Guerrero.  Very nice.  I’d like to land another Santana for myself at some point, but I’m not counting on it.

(EDIT: Just checked.  I’ve landed another Carlos Santana.  Got it for Gallardo.  Lulz.)

Aside from that, I’ve picked up four packs of this year’s A&G.  The first two (from Walmart) were weak.  No inserts, plain ol’ regular back minis (one was a Cub, but I’ve never been a fan of Dempster), and a shortprint of stinkin’ Cardinal.  Only saving grace was Cheryl Burke hawtness.

The second two (from Target) were outstanding, however.  A code version of an SP, a Jason Heyward mini SP, a Most Mysterious Man in the Iron Mask, and an Ascent of Man, which I can confirm are as awesome as advertised.  Plus more cool random people base cards in Kristi Yamaguchi and  Stan freakin’ Lee!  I’ll be keeping Kristi, Stan, and maybe the Ascent of Man (for now at least), but the others are available.  I’m interested in Minds that Made the Future, Highlight Sketches, and Portraits in Penultimacy in return.

I also picked up a few things the on COMC the other day, much of it trade bait.  Flying Spaghetti Monster only knows when I’ll have money to get any of it out though, especially if the government turds out.  Seriously, fuck the GOP.  Right in the ear.  Because God forbid the rich and big businesses start paying their fair share of taxes, amirite?

Anyway, if you like BJ Upton, Jose Reyes (2B?), Victor Martinez, Garrett Atkins, or… Joseph Addai (eh, why not?), or the teams they play/played for, you might be in luck.  Also Carlos Lee and Andy Pettitte.

Also slowly gathering specific things for specific people.  Got at least one thing I owe Ray now.  I’ll set about getting ahold of the rest pending government bullshittery.

Finally, for the love of Tommy Oliver, my email is on my blogger profile which is linked on my sidebar!  Ahem… Sorry, but it’s there.

In the meantime, here’s a picture of a thing (via my first trade with Cards on Cards that I never posted because I don’t know what became of most of the scans :():

Seriously though, I have no idea what this is and have been too lazy and/or unfocused to look it up as of yet.  It’s kinda cool though.

Guess that’s all for this post.  Needs more pictures, but it turned out better than the post I had originally planned.  Baseball cards are much more enjoyable than b*tching about government incompetence, DC Comics incompetence, and… “Unicorns”.  It would’ve been… weird.

It’s too hot for pants…

Hello all.  Tis I… back once again with the third of a dozen binder pages full of goodies (and other things) I picked up from the card guy at the flea market over the past weekend.

Keepers: At least one of the Bears Team Leaders.

Notes: The Hamilton/Crawford is the actual card, not the Yo Momma version, which I also have in original back form.

Also, the reprint is somehow apparently worth more?  Lolwut?

I like the design on the Post Tony Gwynn a lot.  Who says a promotional product tie-in cards can’t look nice?

Mind-Blowing Statistics: The reprint is worth more… Oh wait, I can do better than that.

James Scott’s 759 receiving yards in 1978 is the third highest single season total posted by a Bear in the 1970s.  Only his previous season’s 809, and Dick Gordon’s 1026 in 1970 are better.  On a related note, I’d like to nominate Bobby Douglass as the worst QB in the HISTORY of the NFL.  Ho.  Lee.  CRAP!  How can you be THAT bad and get significant playing time off & on for an entire decade?!  Yeesh… Andre Ware and Ryan Leaf, eat your hearts out.

…Try again later.  Here’s a nice card to look at though:

J-Roll by George Calloway. One of his returns that he ran out of time on. Still good though. He just wanted to get rid of 'em, so I got this and a Jay Bruce for a nice price.

You’ll see why.  Opened as they are listed.  Will do scans when I feel like it.

BCP15 Adam Reifer Cards 1st Yr Chrome- Someone was definitely smoking something when they decided to collate this so stupidly.

There ya go, the same two chrome prospects/WBCs showed up in the next packs as base cards.  Man Topps, couldn’t even kick in a refractor to make my butt hurt a little less?  Wasn’t expecting greatness, but apparently my expectations were too high since I didn’t expect stupidity.

I was very heavily considering a hobby box of this in the near future, because for once, I actually liked Bowman a lot this year… but I’m never going to buy so much as another pack of it ever again without a damn good explanation.  And this combined with the f***ed up patch from my Series 1 Topps blaster awhile back, I don’t think I’ll be getting any more Topps blasters of any kind for a helluva long time either.  And knowing Topps pulled this sort of crap with the National Prides, Baseball Highlights Sketches, and possibly the Hoodwinks in Allen & Ginter, I’m not even feeling buying anymore of THAT anytime soon, and A&G is my favorite set of the year.

ARE YOU SERIOUSLY JOKING???

Well… maybe if your math works like Scott Steiner’s.

The sad thing is, even though you could hear the steam shooting out of my ears when I saw the old packs, I got better cards from those three than the five new ones.  First though, a break of Timeline and Treasury packs…

2008 Upper Deck Timeline (6 cards per pack; look for two inserts in each pack, on average!)

301 Rick Ankiel- I guess this would be a subset of some kind.  Zero on the insert count though, unless they are trying to pass off the subsets as such.  If they are a bit harder to get, that would mean shortprint, not insert, so WTF Upper Deck?  There better be a 4 insert pack out there somewhere…

I mentioned in the shoutouts from my most recent post, these cards are FUGLY.  What an incredibly boring design.  At least Upper Deck X’s design fit it’s theme.  This is just so… blah.  As for the backs, they only have career stats and a little blurb, because of a second, different picture taking up half the back.  This giant picture on the back may be a dig at the 2008 Topps base set design, as this picture is nearly as large as the ones on their fronts.

That was observational comedy, my friends.  Onward to Topps Treasury!

27 Zach Randolph- A big scoring presence that gets rebounds, but is still fairly soft nonetheless.  Still, a fair few teams are lacking the good things he brings.

120 Kosta Koufos Rookie Refractor #’ed to /2008- I assume this is a bronze.  This guy is a rookie Center for the Jazz it doth seem.  Here’s hoping for something better than Ostertagian for the ginormously tall youngin’.

The base design is simplistic, but it FITS THE THEME.  Lack of easily fingerprinted up gloss is nice too.  And the refractor version, much like what 2008 Topps Chrome baseball to the regular set, just makes it POP.

Now then, back to the recrap box.  We’ve established that the packs in it are even more garbage than usual.  Now for the contents of said packs.  I stated earlier that I got better cards from the 1989 Donruss and Topps, and 1994 Fleer Ultra, than the five packs from 2007 (6 and 12 card packs of Topps series 2, 5 card packs of Upper Deck series two and Fleer Ultra, and a 3 card pack of Bowman Chrome.

So here are the best of what I got from each.  You can judge for yourself.

2007 Upper Deck- Mark DeRosa?  The rest of the pack consisted of David DeJesus, Carlos Silva, Alex Rios, and Olmedo Saenz, so… there are no winners here.

I didn’t even get any other good base cards in the 2007 packs.  They were remarkably similar to the old school packs in that regard.  A couple couple nice players, and then a whole lotta nothin’.  Only difference being there are a whole lot less cards in the new packs.

Overall, the Griffey rookie makes it worthwhile, but it still won’t make me tilt my thumb upward.  The Griffey is wonderful, but it’s the principle.  The packs in this thing were garbage enough that I actually mean it when I say “never again” to Walmart repacks, and maybe ALL repacks in general.  It’s just horrid to charge more than $6 for this CRAP.