I promise I will get the 2009 Allen & Ginter wantlist posted before too much longer. I desperately need to draw right now though, it’s like I’m totally lusting after drawing and my brain will explode if I don’t do it soon. I will post the wantlist after though.

Wow, things are starting to get busy at BTHE HQ.  My eyes are buggin’ out like Jeremy Borash just thinking about it all.  Let me check my schedule…

• It looks like I’ve got no less than three(!) packages currently headed my way to prepare for.  The cards I have to send back are set aside (and in one case, pretty much ready to send) at least.

• I’m also in the process of trades with both Marie and Sooz of A Cardboard Problem, as well as Shot Not Taken.  All three trades continue to expand exponential-ish from very humble beginnings.

• I’m also in the beginningest of stages of trades with Dayf (doing my trading specialty, aka the “Lonestarr Classic”: send random cards attuned to a person’s liking and hope there aren’t many dupes and then see what comes back) & Ginter Code co-cracker JD’s Wild Cardz (because I’m apparently the only card blogger that ♥’s them some World Baseball Classic).

A public thank you for the assistance with the bubble mailer SASE btw, Dayf.  Can I post the guide on it’s own page here on my blog?

• My specific ’09 Allen & Ginter wantlist has been requested by Chris of Nachos Grande and a certain Box Opener, so there may yet be more trades soon.  I will post it sometime Wednesday afternoon I think

• I’ve still got my googly eyes on Chris from Sac Bunt‘s available for trade list, and intend to deal with that soon as well.  I wonder how far into the list of what I want from him a ’98 Stephen Davis Skybox Autographics auto, a Clinton Portis UD Graded rookie jersey (not actually graded, btw; #ed to /350 though), a Carlos Rogers jersey, and few other Redskins will get me.

• I’ve still got Gint-A-Cuffs scans to edit and blog (totally forgot to scan the backs of the Ginter Back Minis, so it’ll be a bit longer before I get to it still).  The rest of the package from White Sox Cards needs edited and posted too.

• Finally, I seem to be heating up artistically, busting out with some somewhat successful sketch cards.  I’m starting to think that, even though I’m a total rookie artistically… maybe I don’t suck, and can make something of it.

How do y’all with actual lives & jobs & families & stuff keep your bloggin’s & trades rollin’?  I’m getting totally consumed by this without much of that other stuff to worry about… Am I just that immature & disorganized & inefficient? @_@

Now for the renovation part.  My linkies are back! I dunno why that widget deserted me, but it’s back. I’ll put some more people’s up there once I get a little more organized. I tossed a couple other widgets up there too.

My heart is all in on my blog for the first time, so I’m tryin’ to class it up a bit. I’ve made a conscious effort to include more pretty pictures and shamelessly self-promote the blog on twitter.  It’s even payed off a bit too. My daily hits have more than doubled (to around 30, but still) as of late.  If I ever figure out gimp someday and make myself a banner or something, watch out! 😛 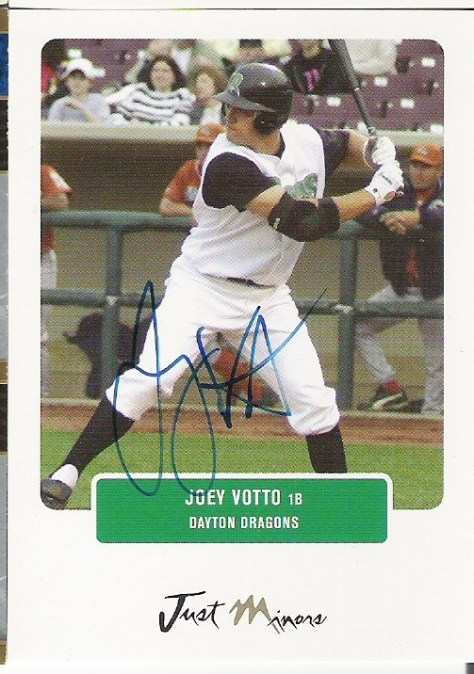 My Joey Votto auto, just because...

And there ain’t no more to say…