What’s this?  A new post?!  Yes, I’m still here.  And since they are the only thing I have handy (I was hoping to do a trade post here, but alas…), here are some pics of some sketch cards I’ve been working on recently.  Last Tuesday I penciled 19 in one day!  Most of them have been given some ink and a couple are colored now.  Check ’em, and the immediately preceding bunches, out! 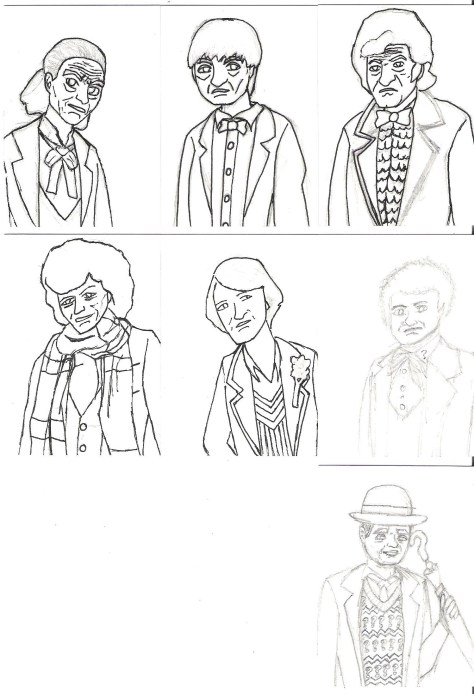 The first 7 Doctors Who..

Was sorta trying to do like I did with the Jareth card I did as an art trade (that you will see in a bit), and not be hyperrealistic, but still instantly recognizable.  What do you think so far?

At first when I didn’t get on the Vampirella set I was just like whatevs, but the more I’ve thought about it, the more it’s bugged me.  I think I’m good enough for a major set like that now!  What say you?

Anyway, those were all the presentable ones from the 19 I did.  One just sucked, one was nekkid, one was pervy (but not nekkid), and one maybe doesn’t suck but I just don’t like how it turned out.  16-18 out of 19 in one sleep-deprived day is still a pretty good percentage though, methinks.  Now for the immediately preceding bunch. 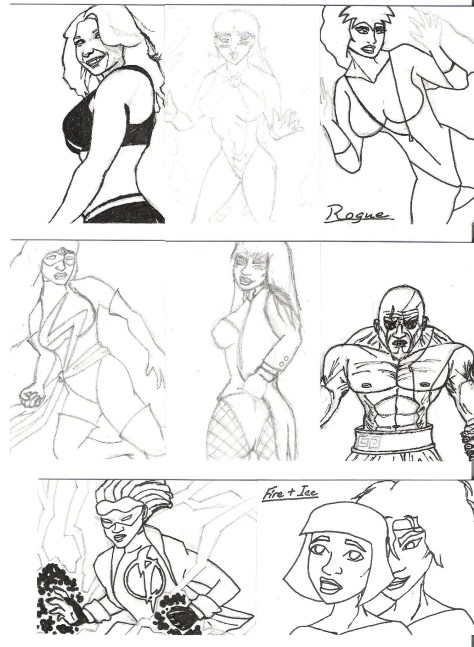 Ms. Marvel and Zatanna were done at the same time on an ill-fated ustream cast, then I did the rest a few days later.  Static is for my dad, his consolation prize for losing our bet on the Bears/Jets game back in December.  I won three sketch cards from him (that he still hasn’t gotten around to doing yet!), but offered one as a consolation.  He was a big fan of the Milestone line back in it’s day, and still has most of the early issues of all the (four?) original series laying around somewhere.

So yeah, not only does artistic ability of various forms run throughout both sides of my entire family tree, but geekery is big as well in at least the immediate.  Even my mom is becoming a fan of Castle and The Cape and has been a pretty serious casual gamer going all the way back to when she used to hog my original Game Boy to play Tetris and Dr. Mario (and be exponentially better than me at both) when I was but a youngling, lol.

Anyway, back to the cards!  These next bunches are from a gaggle of art trades from Facebook and some randoms from right after and precede the above by about three weeks or so I guess.  I think all 7 or 8 people involved have received their cards by now.  I’m pretty sure I’ve received all of mine anyway (another post for another glorious day). 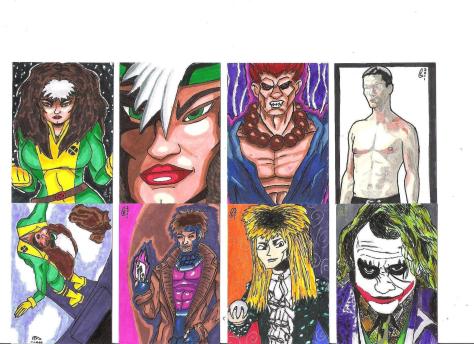 Witwer was mostly just penciled and then colored over with marker.  Still not sure about how it came out, but it was gleefully accepted, although that may just be due to the shirtlessness of it all…

As you can see, Witwer got a darker background and Jareth got a couple touchups before I sent him along.  All that circuitry on Tron was just brutal, although it didn’t really take any longer than usual I guess.  It sorta reminds me of an anime bumper.  The other notable thing is that all the coloring on The Flash is done in colored pencil (as is Tron’s circuitry).  I’m actually quite pleased with how he turned out, considering how little thought and effort went into him initially, and accidentally using the wrong colored pencil at first because they aren’t clearly marked.

So yeah, there ya go.  I had one more scan, but there’s a card on it that might be close enough to NSFW to not post it right now.  Still, this is nearly my entire output from 2011 thusfar.  Save for licensed sets, I think I’m already getting close to what I did in 2010, lol.  And I’d like to think that most of it is worlds better than much of my previous work as well.

Incidentally, I have no idea what I’m actually going to do with most of these.  That first Rogue with the starry background, Tron, Gambit, Jareth, Akuma, Witwer, and Ledger Joker were traded and Static is for my dad, but not so sure about the rest.  I’d like to get the Beth Phoenix and Mia Yim cards autographed.  I have this idea, to do a bunch of sketch cards of real people and get them auto’d, then frame and display them when I have myself a mancave someday.  Everything else… I dunno.  I suppose I may make them available for sale or maybe even trade if anybody is interested in them.  Let me know and we can work something out.

Well, I guess that’s it for this massive sketch card post.  Seeya next time, y’all!