Vintage 2: Son of The Search for Curly’s Electric Boogaloo Returns

Yeah, let that sweet vintage goodness wash over you and cleanse your soul...

These are all Hall of Famers (except the card-sharing Downing and the Cobra, who is fairly close to Hall-worthy), and they are all keepers this time.

Is that ’72 not glorious?  1047 wins represented on that card!  And those two early-mid ’80s Carews probably don’t qualify as vintage yet, but they’re getting way too close for comfort.  That is depressing, because I will become vintage only one year later.  Not cool, man, not cool. 😦

On that disheartening note, the next post will be short, in more ways than one, as we somewhat seamlessly segue out of vintage and into the next section.

Oh, and Merry Christmas and Happy Universal Non-Denominational Holiday Celebration to all!

Check out my cards had a shipping special over Thanksgiving/Black Friday weekend.  10¢ a card.  So I picked up the 77 cards I’d been storing up since about March, for $7.70 instead of over $22.  Well, I had mid-50s, but the $15 I saved on shipping allowed me to pick up about 21 more cards for immediate shipment.  And a few days ago I finally got it all scanned.  So let us check them out, one scan of one section at a time.

First up, we’ll start with vintage, cuz… why not? 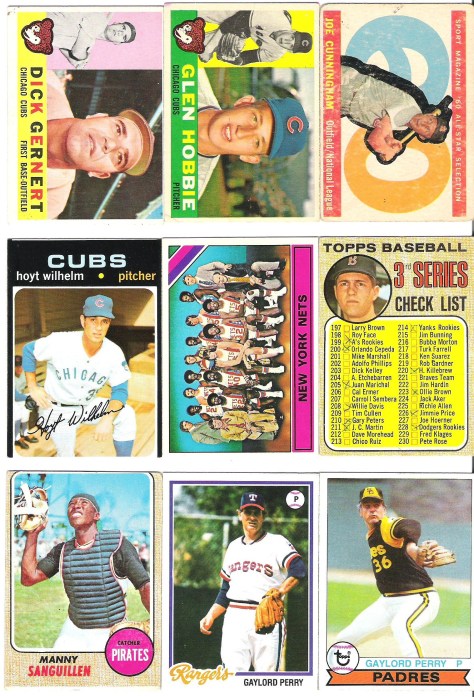 Just stare at them for awhile.  They aren’t all the greatest of players or in the best of shape, but doesn’t staring at old cards just make you feel good?  Doesn’t it just relax you and somewhat put your mind at ease, if only for the moment?

Speaking of condition, the Wilhelm is in spectacular shape, impossibly awful centering aside.  Smooth surface, four sharp corners, and no creases at all.  Can’t ask for more of a ’71.  Only the first five are keepers, Yaz and the bottom row are available for trade.

PS: Nobody has guessed the card right yet.  Everyone that guessed may try again (on that post plz).  We’ll go until someone gets it right.

Near the end of my last post I mentioned I had some ideas to roll out.  And so I shall roll out the one that isn’t stupid now, for I have a plan… A plan to effectively shrink and focus my collection.  It may fail horribly, but I need to try something.

So, in the coming days, I’m going to list all of my cards of a particular team in a single post.  If you see something you like, leave me a comment or shoot me an email and I’ll get back to you and hopefully we can make something happen.  Once the deal(s) have been made and I’ve gotten the majority of that team’s cards confirmed to be traded, I’ll move on to the next team, and so on and so forth.  You’ll still be able to contact me about the remnants of prior teams if you get in late though.

After I get my greezy lil’ mitts on one of the last couple blasters of Allen & Ginter they had at Target the other day (assuming they are still there), I’ll get things sorted out and get this donkey train rolling.

Before we start, some things of note:

• There aren’t likely to be very many, if any, Boston Red Sox, as they are pretty much reserved for Shoebox Legends.

• There will be very few Cubs, seeing as I, uhh, collect them.  Only current players that have been traded or guys I’m indifferent towards, as well as some duplicates I get over the course of this will go out.

• The teams that I think I have the most of in no particular order are White Sox, Yankees, Astros, Dodgers, Braves and Phillies.  I may find this to be incorrect, but I do have good number of each.

• If necessary, I may do posts in set form for ones I have a significant amount of, like ’08 Allen & Ginter, Goudey, Upper Deck, Baseball Heroes, and X.

• After baseball is all said & done, I may do football, which I might even have more of.

It all starts with one of the aforementioned teams I have the most of whenever I can be arsed to get around to going through things.  Here’s hoping all goes well.

I’ll finally have an official, if overly simplistic, wantlist up before I begin as well.  That’s probably a good idea.  Yeah…

I picked up a 10 pack lot of 2006 Upper Deck Special F/X on ebay a few months ago, back when I delusionally had desogns on completing that monster of a base set (1025 cards at 1-2 per pack ha! x_x).  They arrived shortly before I sent out my end of a trade with Steve from the awesome White Sox Cards blog.  I should have sent it out well before then, but as luck would have it, I pulled a green parallel of Rob Mackowiak.  I thought it would be pretty dang cool to throw it in with the rest, so I did.  Turns out ol’ boy Steve went to school with him and shared a really cool memory.  It started me down a path… of enlightenment.  Well, something like that.

This is… insanely late, and I never scanned the cards, but I do have to say thanks, and mention that he completely put my lot to shame with the Cubbies he sent me.  As soon as I figure out how, I’m totally putting him on me blogroll.  Oh he’s good.

Anyway, I think the point of this post was something to the effect of: Timing is a beautiful thing, no?